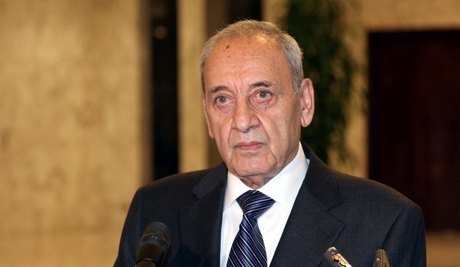 Parliament Speaker Nabih Berri reportedly will announce the framework agreement representing the basis for the launch of indirect negotiations with Israel on demarcating the land and maritime borders, under the auspices of the United Nations and American mediation, al-Akhbar daily reported Thursday.

A high-ranking American delegation led by David Schenker will arrive in Beirut in mid October to start negotiations, it said.

After waiting for more than ten years for the journey of demarcating the land and maritime borders between Lebanon and Israel, with talks led by Berri, they ended with an agreement on a negotiating framework imposed by official Lebanon as a basis for the start of negotiations, reported al-Akhbar.

Berri is likely to announce this agreement today, two weeks before Schenker arrives in Beirut.

In the past two days, Berri received in Ain el-Tineh the commander of the international emergency forces operating in the south, Major General Stefano Del Col, and the UN Special Coordinator for Lebanon Jan Kubis.

Kubis and Del Col met Berri in order to put the “final touches” on the agreement before it was announced, said the daily.

In 2019, Israel said it had agreed on starting US-mediated talks with Lebanon to resolve the disputed maritime borders.

Direct, indirect, what difference does it make. In the end some agreement on the sea borders will be reached and signatures of Lebanese and Israeli officials will appear on the same document.
So why can't this happen on a land border agreement?

It is about time. The world is moving forward, our neighbors are moving forward, and we keep moving backwards, and towards darkness...
I pray that we demarcate those borders, and end up Ebola's pathetic excuse of a "Resistance"..

Berri is Parliament speaker, under what authority is he acting to negotiate, accept or reject border demarcation?

Maybe he should stand on the border and move out of his 'position' as parliamentary speaker and the bower to kizb pressure.

The gov should get Nasrallah to negotiate maritime borders. The sheeba seas

Well shias will take over the arab world if deal is struck between them and the jews..sunnas and xhristains will be their slaves..

You guys got it wrong..if israel amkes a deal with iran..every fucking arab from morroco till the tips of yemen would be slaves to shias... saudis will be sucking shias dicks.. israel wants peace with shias.. sunnas and every sect would be kick out..