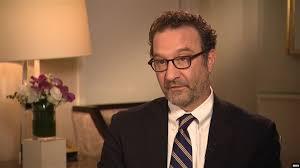 U.S. Assistant Secretary of State for Near Eastern Affairs David Schenker announced Thursday that Washington will continue to slap sanctions on Lebanese individuals despite the U.S.-mediated framework agreement between Lebanon and Israel to launch talks over their disputed borders.

Noting that the U.S. will not “talk to Hizbullah” in its border demarcation mediation, the U.S. diplomat warned that the Iran-backed party might seek to sabotage the Lebanese-Israeli talks.

And pointing out that maritime border demarcation might help Lebanon economically, Schenker said the indirect negotiations will not normalize ties between Lebanon and Israel.

He however added that “both sides seem eager to be able to get a deal” on border demarcation.

1948 - You had to say it 3 times, but I'll only answer once. Because of people like you Lebanon and the Lebanese people will continue to suffer as in the time of the civil war instead of looking forward to financial and economic security, peace and tranquility being offered them in this third decade of the 21st Century.