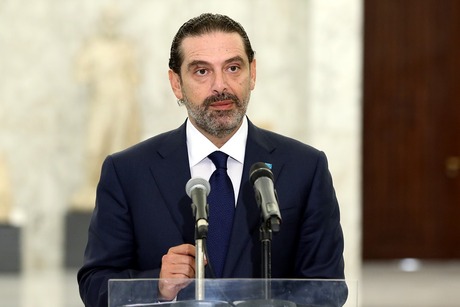 Ex-PM Saad Hariri held crucial government formation talks on Monday with President Michel Aoun announcing that a delegation will be dispatched to hold contacts with Lebanon’s various political blocs to confirm their commitment to the “reform-oriented” French initiative towards Lebanon.

Hariri emphasized that the French initiative launched by French President Emmanuel Macron towards Lebanon after the August 4 explosion, is the “last chance for Lebanon to stop collapse and rebuild Beirut,” he said in remarks to reporters at Baabda Palace after meeting Aoun.

Hariri said “all political parties in Lebanon realize well that time must not be wasted in political bickering” while the country grapples with multiple crises.

“I told the President that I will dispatch a delegation to communicate with all political blocs to ensure they stay committed to the French initiative submitted by Macron at the Pine Residence,” added Hariri.

“The French initiative advocated for a government format made of non-partisan specialists for a period of only six months. We as political parties won't perish if we stay out of the government for six months,” stated Hariri.

“Reforms (intended for Lebanon) are specified and detailed in the Pine Residence paper. This allows Macron, according to what he pledged, to mobilize the international community to invest in Lebanon and provide funds. This is the only way to stop Lebanon’s terrible collapse,” he concluded.

If they bring this incompetent monkey back on the anniversary of the popular uprising that kicked him out, it would be the biggest insult to the people possible. But considering the pieces of shit running the country, nothing would surprise me less...

Come on let's get Lebanon sorted

this has been their tactic, first name some innocent( naive) individuals to form a government, block the formation, then bring the old gang again as saviour...it is so obvious, it is an insult to the people.