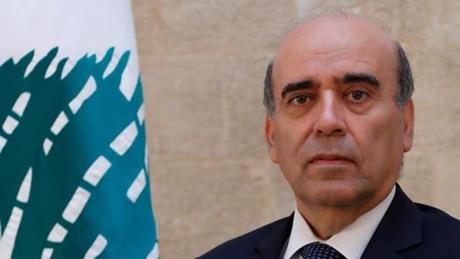 Caretaker Foreign Minister Charbel Wehbe announced Tuesday that by holding maritime border demarcation talks with Israel, Lebanon will not be “recognizing” Israel as a state nor “normalizing” ties with it.

“We are not making an agreement to recognize the state of Israel… We are negotiating to agree on the demarcation of the maritime border. We will not normalize ties nor agree to peace treaties,” Wehbe told reporters at the Foreign Ministry.

“They consider that we are a state whose economy is destroyed and in ruins… but I say that the Lebanese negotiators will be much fiercer than they imagine, because we have nothing to lose,” the minister added.

He also noted that Lebanese authorities have been keen on maintaining silence regarding the negotiations.

“Silence is not weakness, nor lack of awareness, nor diplomatic ignorance, but rather a stance and a plan that confuse the enemy,” Wehbe pointed out.

He added that “negotiations with an enemy state require cleverness, patience, firmness and farsightedness,” calling on the Lebanese delegation to “cling to these characteristics.”

To understand politics anywhere is simple, everything they say is true but in reverse! If you cant convince them, confuse them!

aretaker Foreign Minister Charbel Wehbe announced Tuesday that by holding maritime border demarcation talks with Israel, Lebanon will not be “recognizing” Israel as a state nor “normalizing” ties with it.
OK , but this is the first step...we understand

silly feud is over a name ? mama mia!

Peace is the only Lebanon can move forward. The people can no longer afford to live in oblivion. This person is suppose to be a man of peace not war.

But you do agree with shaking hands with the Turks who murdered thousands of Kurds and Armenians, not to mention the Syrians who have recently murdered hundreds of thousands of their own. You agree to shake hands with the Russians who murdered millions of their own citizens (such as Crimean Tatars) during WWII.
Could this stand of your be simply that you hate the Jews and look for different ways to make it look different.

Phillipo, doesn't deny your claim he says: " But you do agree with shaking hands with the Turks "...meaning he agrees with your statement. To make it clear you are talking about Israel government and not about the jews in general, there are significant part of the jews who do not agree with Israel politics.

“We are not making an agreement to recognize the state of Israel… We are negotiating to agree on the demarcation of the maritime border. We will not normalize ties nor agree to peace treaties,” Wehbe told reporters at the Foreign Ministry.

What do you expect from a former adviser to aoun who is subservient to kizb?

Israel came into its modern existence by replacing Palestine and ethnic cleansing it's people in 1948. Palestinians are the ONLY nation of millions whose majority are forced to live in exile ONLY because they are of the wrong religion. Israeli apartheid must go!

what about Kurdistan, for one?

lebonknees4peace Tell that to the rulers of the Apartheid regime in occupied Palestine. If they want peace then they need to end apartheid.

dream on... Yes, that what Mandela was told to dream on when he was put in prison in 1964 and his only supporters were Castro and Gadafi. Your years are numbered.

little John you talk a lot and do nothing, there is the south border and a brave fool like you should go blow himself up. That would be a win win situation for all...

By any standards you have recognized Israel which you should have done 50 years ago and we would not be in the mess we are in. Lebanon stood for Arabism, Palestiains, Islam and in particular Iran, Syria, KSA and Shi3ism and look at the wonderful results we attained! We have no law, no economy, no water or electricity and a nation that has been invaded by 2MM Syrians, not to mention the thousands of Iraqi's et all. All this we did in defiance of Israel and now as a result we acheived a rating of one of the worlds lowest living standards.