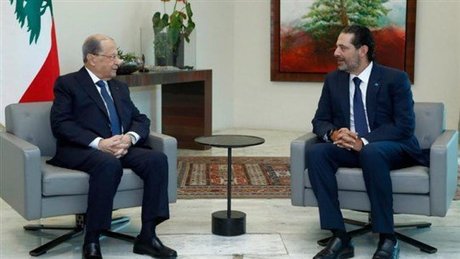 After President Michel Aoun’s decision to postpone the binding parliamentary consultations, the President reportedly reiterated “support” for the designation of ex-PM Saad Hariri, noting that the consultations to name a PM were postponed to ensure a swift formation of a government, MTV station reported Thursday.

“Aoun received phone calls from several heads of parliamentary blocs (Wednesday evening) asking him to postpone the consultations. Aoun sought, together with the upcoming PM-designate, to give a better opportunity for the French initiative to succeed,” the station said, quoting sources close to Aoun.

“Aoun does not have a veto on Hariri. Everything being said in that regard is not realistic. Aoun is working on securing a better cover for Hariri,” according to the sources.

They went on saying that the President is “keen on preparing the right atmosphere for a swift formation of a government facing a reform program which must be agreed upon.”

Late on Wednesday, the Presidency issued a statement saying that President Michel Aoun postponed the consultations to name a new premier to October 22.

Who? Tell us who is not dying and awaiting more to leave Lebanon..always keep it secret

The Hezb and Gebran Bassil (the aforementioned "several heads of parliamentary blocs") called Aoun last night to postpone the constitutionally mandated consultations. Because on the one hand, the Hezb did not get the commitment from Hariri for the Shiite duo to name the Shiite ministers. On the other hand midget in-law was annoyed that he missed out on a prized poser photo op, after Hariri sent the Future parliamentary bloc caravan to FPM's HQ in Mirna Chalouhi rather than going himself all the way up to Laqlouq to visit his shortness. After the news and social media sites exploded with comments against the senile deserter, Salim Jreissati came up with an out by pushing Hagop the Armenian and his little bloc to take the blame for the postponement.