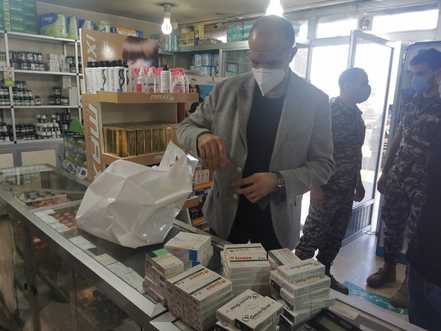 Caretaker Health Minister Hamad Hassan on Thursday inspected pharmacies and medication warehouses in the Zahle district after some of them were found to be smuggling medicine to outside Lebanon.

The National News Agency said some of the pharmacies and depots had been ordered sealed with red wax by Bekaa Attorney General Munif Barakat.

“The medicine mafia in Lebanon has started collapsing,” Hassan announced during the tour.

Finally we need new IDs with an integrated chip, not this lame bar code we currently have.

I commend the health minister and in my humble opinion, he is doing well for Lebanon, as I said before, ignoring partisan and secterian issues, he is a good man for Lebanon. Yes, there should be changes to prescription rules, but Lebanon still much better than many other 3rd world countries

what are you talking about? my cousin and her husband have a pharmacy each, they're out of common medicine for diabetes, heart etc. we've become like Venezuela courtesy of this shitty corrupt and incompetent minister. The guy is a cheat, he bought his diploma from Moscow, he's exactly like the smugglers and criminals that have ruined this country.