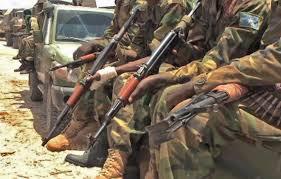 More than 10 Somali soldiers were killed and an unknown number wounded when Al-Shabaab Islamist fighters ambushed them near a southern village, a military official and family member said Thursday.

"The soldiers were travelling with two military vehicles when ambushed near Afgoye. More than 10 soldiers including the commander in charge were killed," Colonel Mohamed Hassan, a military officer in Afgoye, a town 30 kilometers (18 miles) from the village, told AFP.