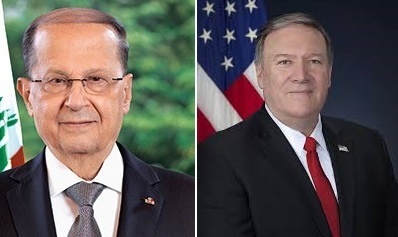 The talks tackled “the Lebanese-American relations and the latest developments, including the negotiations over the demarcation of the southern maritime border,” the Presidency added in a statement.

During the phone conversation, Aoun thanked Pompeo for “the role that the United States is playing as a mediator facilitating the negotiations,” stressing that Lebanon is “determined to preserve its territorial and maritime rights and sovereignty.”

Pompeo for his part informed the president that Washington intends to send aid for the reconstruction of neighborhoods devastated by the August 4 explosion at Beirut port, the Presidency added.

God bless President Aoun for making the Americans submit to his demands and forcing U.S. Secretary of State Mike Pompeo to contact him begging for forgiveness and acceptance.

At the all the leaders of the world will come and shake hands with our president Michel Aoun, God bless him