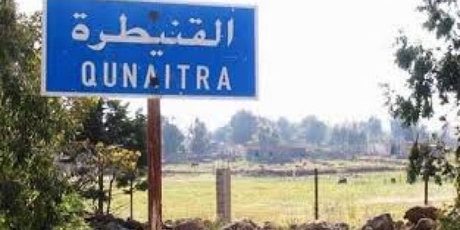 The three were from the Syrian Resistance to Liberate the Golan, a group linked to Lebanon's Hizbullah, said Rami Abdul Rahman, head of the Britain-based Syrian Observatory for Human Rights.

The group was formed more than six years ago to launch attacks in the Israeli-occupied Golan Heights.

At least one of the killed fighters was Syrian, the Observatory said, but the nationalities of the other two remained unclear.

The official SANA news agency reported the Israeli strike on a "school" in Quneitra's northern countryside shortly after midnight, but did not mention casualties.

Abdul Rahman said that Iran-backed fighters were staying inside the facility the night of the attack.

Along with Russia, Israel's nemesis Iran has been a key backer of the Damascus regime in its nine-year-long civil war.

Israel has carried out hundreds of air and missile strikes on Syria since the civil war broke out in 2011, targeting Iranian and Lebanese Hizbullah forces as well as government troops.

When would Palestinians realize the only reason Natanyahu still in power is because of Hizbollah rockets. Natanyahu and Hizbollah are two sides of the same coin, surviving on threats, intimidation and destruction. They depend on each others for survival. A match made in Hell. Even Berny Sanders called Natanyahu a bigot and racist as do large section of Israeli Jews. Time to get rid of Hizbollah arms and have a real peace with Israel that will benefit Lebanon's southern region and launch many joint ventures to benefit both countries. Tourism and trade will flourish including a new route to Jordan and Egypt.

Sweet dream gebran-sons...
But this will not happen in a billion years.
Lebanon is doomed, the good people left in this country are running away to Europe and Canada... well... those who can.
The Revolution has failed, there is no Government, the country has collapsed economically.The only country that tried to help us failed. The IMF failed. We still have no answers about August 4th. We are ruled by a thief and a senile zombie, and we have no Prime Minister.
Our currency is worth less than Monopoly bills, and our army is barely fed.
At the end ther will be two options:
1- Obscurantism... the country will be excusively ruled by Hezbollah that will take over after a quick civil war...
2- Partition. With 3 mini states, each one sponsored by Iran, KSA, and Europe... or something equivalent.
But I doubt that Israel would accept Option 2.
In any case, and in my opinion: Lebanon= No Future!

It is a well known fact that when solutions to problems fail , these solutions tackled the symptoms and not the root cause of the problem. Our friend up with his dreams doesn't realise that if this party disappear another one as bad or worse will emerge. The foundation ,the culture, the quality of upbringing in this country are so diverse that it is impossible to create one nation

I disagree, no Country has the human and entrepreneurial resources of Lebanon, not to mention successful worldwide diaspora. Our potential is similar to Singapore and Monaco. Let the thuwar use UN Neutrality as a theme and watch Lebanon becoming the most successful country in the region in this post-opec world. We need to rebuild our universities with focus on AI, robotics, digital data, healthcare, sustainability... As hyperinflation helped Germany with its loans after WWI, so there is an opportunity for Lebanon to rise like a phenix... though nothing is possible without disarming Hizb and neutralizing foreign policy the main source of our problems. Corruption and accountability must easier to address afterward.

@my friend gebran...
Germany was an Industrialized country... We have zero Industry. Only service industry (Hotels, Bars, Pubs, restaurants, Clubs, Casinos...) and our diversity and instability do not allow us to give a qualitative service. Because of hezbollah, and also because of corruption, our infrastructure is failed. Our food quality is not controlled. Our streets are dirty. No water, Electricity, trash recycling, safe highways, etc... We are doomed my dear Gebran... I admire your optimism though.

Who cares about old industry! Tesla is worth more than GM, Ford, Fiat-Chrysler, Mercedes and BMW combined. Tesla cars are 90% constructed by robots. But needs all types of engineers and scientists. If Lebanon stable, a gigafactory in Bekaa, Akar or Southern Lebanon would make perfect sense due to its engineering and technical skills required that Lebanon can provide at a competitive price. An AI engineer, digital security expert, or advanced material chemical engineer starting annual salary is over $200,000. Lebanon can cheaply be connected with gigaHz fiber optic to create a mini Silicon Valley in every region. Never estimate Lebanon's potential. I've hired tens of engineers and I know what I'm talking about. Investment will never happens when occupied by HizbIran. Shia paying highest price!

Regarding corruption, accountability, transparency and processes, you are correct! However, this is not rocket science and it can easily be fixed if there is a will and Thuwar play a part. All government processes should be digitized completed from home (less traffic) and all public information made public by law as well as all transactions. Regarding our diversity, I again disagree. Gebran Tueni believed Lebanon diversity is our strength and I fully agree with him. Europe Sunni population is gaining number and influence. With Turkey demise, Lebanon Sunnis tolerance and democracy can be an inspiration to Europe. As to Iran's Green Revolution, if Lebanese Shia supported its democratic aims, it would have changed Iran for the better. Imam Moussa Sadr would have been its primary supporter. Unfortunately Berri is taking his community and Lebanon to the abyss, racing with Aoun who is taking Lebanon to Hell!

It's sad when people die but Iranian paid stooges anywhere are threats to civilized society.

So there is good news sometimes...