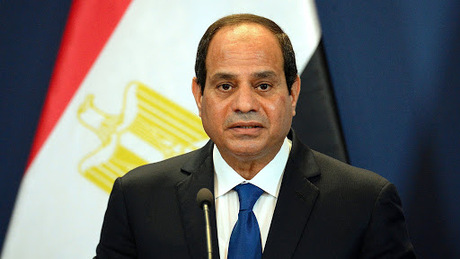 Egypt, which holds first round legislative elections at the weekend, has been ruled with an iron fist by Abdel Fattah al-Sisi since 2014.

Here is a look back at his presidency:

On May 28, 2014, former army chief and defence minister Sisi cruises to a widely-expected election victory, becoming president with nearly 97 percent of the vote.

With the opposition, especially Islamists, stamped out ahead of the election, turnout is low.

Sisi had already been running the country for nearly a year after leading the army's overthrow of Islamist president Mohamed Morsi, the country's first democratically elected president, amid mass anti-Morsi protests in July 2013.

Sisi launches a bloody campaign to crackdown on dissent, especially the Muslim Brotherhood.

Towards the end of 2015, a new parliament is elected, stacked with loyalist MPs.

The elections are held over one and a half months in the almost complete absence of opposition candidates.

The low turnout -- 28 percent -- is in stark contrast to the political enthusiasm which surrounded legislative polls in 2012.

Easily won by Islamists, they had been held in the wake of the 2011 revolution that drove strongman Hosni Mubarak from power.

Egypt has experienced a string of bloody terror attacks, mainly by the Islamic State (IS) jihadist group, often targeting security forces in the northeastern Sinai Peninsula or Egypt's Christian minority.

Since 2016, more than one hundred Christians have been killed in IS attacks.

On November 24, 2017, gunmen open fire in a Sinai mosque killing more than 300 worshippers -- the deadliest attack in Egypt's recent history.

IS is suspected, but never claims responsibility.

Since 2018, the army has been carrying out a large-scale operation against IS in the northern Sinai.

In March 2018, Sisi is re-elected, as expected, with 97.08 percent of the vote. His only "opponent" is an ardent supporter. All serious contenders had been barred from standing or had withdrawn.

In late May the European Union criticises the arrests of opposition figures and members of civil society.

Relations between Russia and Egypt have strengthened in recent years despite the 2015 Russian airliner bombing.

In November 2015 they sign an initial accord for Russia to build Egypt's first nuclear power station.

That is followed up by Sisi signing a strategic agreement with his Russian counterpart Vladimir Putin on October 17, 2018.

In April 2017 US President Donald Trump praises Sisi as he visits Washington. Sisi is hosted at the White House for a second time in April 2019.

In April 2019, controversial constitutional amendments are adopted at referendum by 88.83 percent.

Under the revision Sisi's second term is extended from four to six years, thus to 2024. He will also be able to stand for a third six year mandate in 2024.

On June 26, 2020 the International Monetary Fund approves a $5.2 billion aid programme to help Egypt face up to the economic impact of the coronavirus.

The plan comes on top of $2.8 billion unblocked in May.

Sisi carries out under the IMF a highly unpopular austerity programme, slashing subsidies for petrol, electricity and basic foodstuffs.