Hariri Says to Cooperate with Everyone for Country's Interest 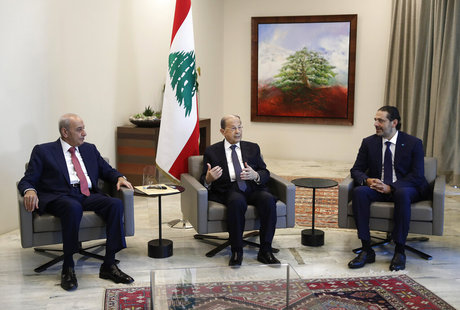 Prime Minister-designate Saad Hariri hinted Thursday that he intends to cooperate with all parties in the coming period.

Asked about the “positivity” he showed today, Hariri said “it’s the beginning.”

Hariri was earlier in the day designated by President Michel Aoun to form a new government after securing slim support from members of parliament.

He vowed to stop the economic, social and security meltdown and rebuild after the port explosion. "I say to Lebanese who are suffering hardship to the point of despair, I am determined to keep my promise," he said.

I think iran has done plenty of evil and i don't trust it. But nice try ya troll. How many accounts do you have?

lol @ 'How many accounts do you have?'

Failure and corruption in one picture

God bless SupportBeirut for being a first time poster who uncovered the usual zionazi commentors on naharnet these days with multiple accounts.

Hezb is one the cancers of Lebanon and that is why the country is like this now a days. They like Hariri cause he is part of the system. What a pitty for this country and for it’s people which unfortunately they will never be free. 1 year for nothing and turning back to the same place, even worst now..i think i’ve never seen a worst political system than this in any country. Why doesn’t Hezb go to Iran and leave Lebanon in peace? This people just don’t understand of democratic or freedom. They only understand the way of arms. They use Lebanon and the Lebanese for there own benefit.