One Year on, How is Lebanon's Hariri Back? 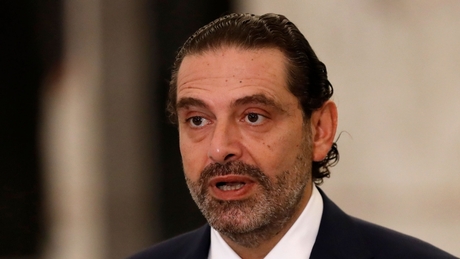 One year after mass protests pushed him to resign, Saad Hariri is back as Lebanon's prime minister designate to draw together a pro-reform cabinet that can save the crisis-hit country.

What circumstances brought him back? What do the international community and key players inside Lebanon think? And will the consensus on him being named make his tricky task any easier?

Why the return?Less than two weeks after an unprecedented street movement erupted in October 2019 against a Lebanese political class viewed as inept and corrupt, Hariri stepped down.

He had presented a roadmap for reform to stem the country's economic downfall, but it was rejected by the angry street.

The country has since sunk further into crisis, with poverty soaring to more than half the population, banks increasingly restricting access to savings, a novel coronavirus lockdown, and finally on August 4 a massive blast at Beirut port that killed more than 200 people and ravaged large parts of the capital.

Protests gradually subsided in 2020, reinvigorating the derided political class, which hampered the efforts of the next premier Hassan Diab towards redressing the country, and then those of his successor Mustapha Adib in forming a new crisis cabinet after the Beirut blast.

In early October, Hariri -- already three times premier and the head of the country's main Sunni Muslim political party -- said he was "definitely" a candidate to take on the task.

Named on Thursday, he pledged to swiftly create a government of experts not affiliated to the country's traditional political parties, calling it Lebanon's "only and last chance".

Analyst Karim Bitar said: "The revolution wasn't able to produce leaders or form a unified front, while the traditional political parties were able to consolidate their ranks, regardless of divergences over pie-sharing."

But Hariri's foreign backers France and the United States have different priorities.

Paris wants a new pro-reform government of experts to fit the criteria proposed by France's President Emmanuel Macron under the so-called "French initiative".

The US and its ally Saudi Arabia are however more focused on neutralising the Shiite movement Hizbullah, the only side not to have disarmed after Lebanon's 1975-1990 civil war.

"The Americans and Saudis are expecting Hariri to adopt a slightly more hawkish position regarding Hizbullah," Bitar said.

The United States on Thursday targeted two Hizbullah officials with economic sanctions, its latest against the group it regards as "terrorist".

All sides will be awaiting long-demanded reforms to unlock billions of dollars in financial aid to rescue the debt-ridden country.

What about in Lebanon?Hariri's nomination was backed by a majority of 65 lawmakers.

Hizbulah and its ally the Free Patriotic Movement led by the president's son-in-law Jebran Bassil did not name him.

"Hariri is the candidate of the Shiite duo and the deep state. He is an integral part of the system," said Michel Douaihy, an analyst close to the protest camp.

"Hizbullah is comfortable with Hariri. The party needs Sunni cover in the region," he said.

Bassil's decision not to back Hariri was more to do with a power struggle between both men, Douaihy said.

"They're both 50 years old and want to be boss," he said, one as premier and the other eventually as president.

But in the end they would have no other option than to sit at the same table, Douaihy predicted.

What challenges?Forming a cabinet can take months in Lebanon, where ministries have traditionally been shared out between its various political and religious sides.

In the last bid to create a cabinet, Hizbullah and Amal refused to relinquish control of the finance ministry and insisted on naming Shiite ministers, causing Adib to quit.

Bassil, who was foreign minister in the government that stepped down last year, has claimed the next cabinet will have to be made up of both technocrats and political appointees since Hariri himself is not an independent.

Finally, Hariri will have to endure the hostility of the protest camp, who view him as a member of the old political class, even if there was no immediate reaction in the street after his appointment.

God bless Sheikh and Imam Saed Hariri for protecting Shia rights to the finance ministry and for supporting the Shia resistance against the Saudi-American-Israeli-Bahraini-Emirati-Sudani coalition.

How?
an example of foreign powers playing with Lebanon and children of leaders such as Hariri selling their Lebanese blood to deal with Amal, HA and the evil foreign govts