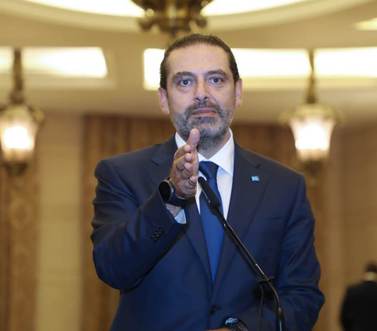 Prime Minister-designate Saad Hariri on Friday described the non-binding consultations he held with parliamentary blocs as “positive,” noting that the discussions focused on the reforms that the new government should implement “as soon as possible.”

“This government will be a government of specialists, so that we work quickly according to the French reform paper,” Hariri announced after the consultations.

“We must deal with this opportunity by putting aside all our political disputes and showing positivity, so that we regain confidence between the citizen and the state and between the state and the international community,” the PM-designate added.

As for the dire economic and financial situations, Hariri said that the country has not reached a “dead end.”

“We can overcome what we are going through, but certainly that will take time. However, we must carry out our duty in terms of the reforms that we agreed on at the Pine Residence,” Hariri went on to say.

He said that the only way to achieve that is to “speed up the formation of a government that can work on accomplishing all these reforms as well as the International Monetary Fund’s program.”

“We must lay out the right foundations so that capital can return to the country,” Hariri said.

He added: “I carried out consultations with most blocs and I will meet the President as soon as possible to discuss and consult with him over the outcome, and I will hold further consultations to pave the way for the formation of the government.”

This is what you get when you beg for the colonializing and criminal france to be your saviour - a Hariri come back.

lol @supportbeirut on the tarik