Aoun Discusses with Lavrentiev the Russian Initiative on Refugees 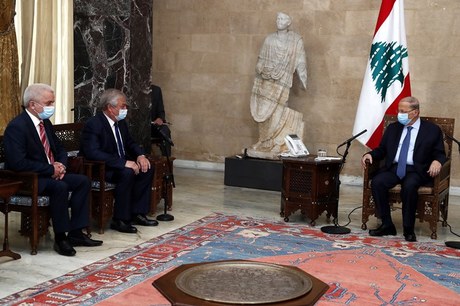 President Michel Aoun received at Baabda Palace Russia's special envoy to Syria, Alexander Lavrentiev, at the head of a delegation of diplomats and military personnel, the National News Agency reported on Wednesday.

Discussions focused on the Russian initiative to return Syrian refugees back to their homeland, and on the international conference to be held in Syria for the repatriation of the displaced.

In 2019, Aoun agreed with his Russian counterpart Vladimir Putin and other Russian officials to “activate tripartite Lebanese-Russian-Syrian action to secure the return of Syrian refugees” to their country.

The high-ranking Russian delegation arrived Wednesday in Beirut aboard a Russian military plane on an official visit to Lebanon.

The delegation is composed of a number of diplomats and military personnel.

It is set to meet other senior Lebanese officials to discuss the international conference on the return of displaced Syrians. Talks will also highlight the bilateral relations between Lebanon and Russia.

the only thing this president does is discussing, daily I hear he discussed this and that with this one and these ones, but up-till now we didn't see any results, My advice stop discussing and make room for others.

The only thing he's ever wanted was to became president. It's the deluded narcissist egomania thing. He stared two futile disastrous wars to became one. Ran way when he failed. He changed positions like they were underwear. Made deals with anyone who would promised him the presidency, even his lifelong enemies. When he got his wish it became clear he's as lunatic, incompetent, destructive, out of his depth and corrupt a president as he was a prime minister. I suppose these qualities were what prompted Hafez al Assad to encourage Berri, Jumblat and co to support Aoun's unusual promotion to Army commander, after they'd rejected all previous of Amine Gemayel nominees, all much more senior, worthy and competent candidates than Aoun.

It may not be a daily thing. I recently learned that my 90 year old aunt doesn’t change hers every day. She claims they’re clean........ if I mention this, it’s because I’m still shocked.