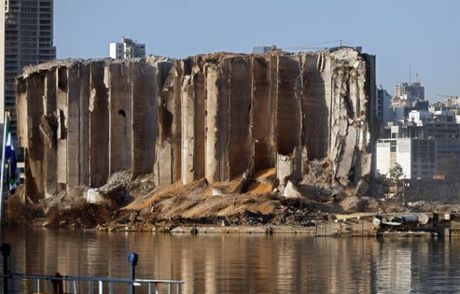 A distressed son looks for his father, a lazy beach day ends in tragedy: Lebanese can now stream short films about this summer's devastating port blast -- but some say it's just too soon.

Only months after the August 4 explosion killed more than 200 people and ravaged large parts of the capital, the Shahid VIP streaming platform says its aim is to pay tribute to the victims.

But some say they do not want to relive the trauma shown in the "Beirut 6:07" pm series, named after the exact time a huge stash of ammonium nitrate detonated in a dockside warehouse after it caught fire.

Mazen Fayed, one of the project's producers and a director of one of the films making their online premiere this month, said the intention was to honour those killed.

"We have the responsibility to talk about them and to keep the memory of these people alive," he said.

"We didn't have to look very far. the stories were in front of us, we were hearing about them every day."

The explosion, which also injured thousands, was the latest blow to Lebanese already reeling from an economic crisis that sparked mass anti-government protests.

In the short film Fayed co-directed with Nadia Tabbara, a young man desperately runs around the ravaged port, looking for any trace of his father who works there.

Just a few hours earlier they had argued, we learn, as flashbacks recount the story of this Shiite family of modest means.

The father, who fought in the 1975-1990 civil war, had despaired to see his son caught up in sectarian politics and taking part in violent counter-protests.

In another film, filmmaker Caroline Labaki imagines what could have happened if the explosion had been prevented.

It shows Beirut firefighters celebrating a birthday, before rushing out to put out a fire on the docks.

A news report announces the blaze has been put out before reaching the massive stockpile of fertiliser, averting disaster.

But in real life, the explosion could not be prevented and 10 firefighters were among those who lost their lives in Lebanon's worst peacetime disaster.

The streaming platform covered the production costs including pay for part of the crews.

But the concept has received mixed reviews online.

Several social media users have questioned its timing, including after the series' action-film-like trailer was released.

"I almost had a panic attack just watching this trailer," one Instagram user wrote. "You are making us relive the horror we have been trying to forget."

"You think it's the time to make a show about our tragedies?"

On November 22, Lebanon's Independence Day, Saudi-financed satellite television channel MBC4, which owns Shahid, is to air the films to audiences across the Arabic-speaking region.

Until then, viewers can watch 11 of the films already available on Shahid VIP for a fee.

The streaming platform refused to give figures but said the series had been "well-received in the Levant region, where it quickly became among the most watched titles".

Among the short films, filmmaker Ingrid Bawab chose to portray a couple at the beach.

The camera films seawater gently lapping against the beach, before panning back over the pebbles towards a couple taking in the last rays, then packing up to drive home. Then disaster strikes.

"It's about dreams, hopes and plans that got shattered," Bawab said.

It's about "what was before and what was ruined. It's not a film that sears your eyes, it's one that breaks your heart."

The director said it was the most emotionally charged project she had ever worked on.

"It was like group therapy," she said. "The crew were people who had escaped the blast, lost their home or people they knew," she said.

Streaming giant Netflix too has taken an interest in Lebanon.

This month, the platform said it and the Arab Fund for Arts and Culture had set up a $500,000 emergency relief fund to support struggling workers in its film and television industry.

Netflix is also showcasing 34 Lebanese cinematic gems "to give audiences from around the world a glimpse into the struggles, hopes and dreams of Lebanon".