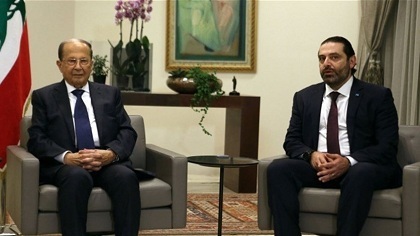 President Michel Aoun and PM-designate Saad Hariri held a “secret” meeting on the government formation on Monday “without making any progress,” al-Joumhouria daily reported on Tuesday.

One week after an announced meeting between the two leaders, Aoun and Hariri reportedly held their meeting at Baabda Palace Monday afternoon away from the media, said the daily.

But Baabda sources denied the matter, while sources of Hariri’s Center House maintained silence on the issue, it added.

According to information obtained by the daily, no progress was made amid political horse-trading blocking the formation process.

“Despite foreign pressures mainly from France, Lebanon’s related parties have not softened their rigid stances and demands for ministerial portfolios,” said the sources.

Never has Lebanon seen or known a president-pm combo like this one, ever!

to say that this country is ruled by incompetent and untrustworthy people remains a weak description, I would add: criminals without conscience with satanic attitude

STOP BLAMMING THE POLITICIANS!!! The sheep that continue to follow them are the ones to blame. The politicians are sucking the sheep dry and the sheep not only follow them to the death but hold the crooks in the highest esteem. They worship them and it is beyond me as to why? how brain washed are these people?

Partially true, most of the sheep you’re referring to stopped supporting and following their idols, yet the crooks are still hanging onto power.

canadianleb: I don't think your statement is fair. If you have followed the developments of the past years you can conclude that a significant part of the population wants reforms, but most of the politicians, read: mafia / gangsters criminals, have armed militias .. So no chance for (what you call ) the SHEEP to have real change in this country, very sad but that's the reality. I hope you get an objective and fair view over the majority of the peaceful citizens.

lets see next election then we can judge

What the hell for does Hariri keep going to Baabdas the Ceylon tea?

In all fairness Canleb there is little that can be done past blod shed in the streets. There are no Lebanese who want to be the next martyr to try and tell this dictatorship they are unappreciated for what litte they have done. The current government cares little about the people they are supposed to serve so they will not want to voluntarily give up their posts. Blodshed is what it takes in a 3rd world country and right now you will not find too many volunteers from any side who oppose the government.

Look at these 2 incompetent clowns... You can see stupidity on their faces.