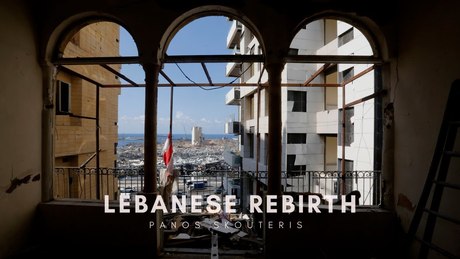 Beirut’s devastating port explosion on August 4, 2020 that killed 200 people and flattened large parts of the capital, has reverberated through many parts of the world impacting many including artists, illustrators, directors, and writers who expressed their sorrow for Beirut in their work.

Greek musician and composer, Panos Skouteris, was inspired by the catastrophe and the tragic days the Lebanese lived through. He featured Beirut, a city renowned for its love of art, life, and joy, after the blast in three short videos he dedicated to its people.

He played for Beirut flashing passion, and showcased three musical pieces on YouTube and on his personal Instagram page.

The first musical piece he named Pray for Beirut, has featured the view of the port of the city after the colossal explosion.

The second musical piece Skouteris named the Lebanese Rebirth, through which he gave hope to the reconstruction of the city and its destroyed neighborhoods despite the loss it encountered.

In Memoriam, his third piece. The musician was keen to salute through his music the souls of the victims who died in the explosion.

The explosion, which also injured thousands, and left more than 300,000 people homeless was the latest blow to Lebanese already reeling from an economic crisis that sparked mass anti-government protests.