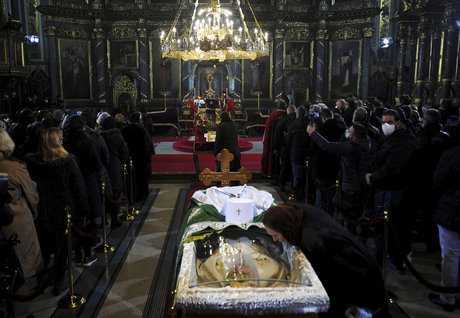 The 90-year-old spiritual leader was infected soon after presiding over the funeral of a senior colleague who also died of the virus, a ceremony in which basic safety measures were neglected.

The sound of the bells from Church of Saint Sava, the biggest temple in the Balkans, rang out as the faithful stood next to each other in the cold in the square outside the building. Many of them did not wear face masks.

The patriarch became the first cleric to be buried in the crypt of the church, which is still under construction.

The Balkan country of seven million people, the vast majority of whom are Orthodox Christians, declared three days of mourning following the spiritual leader's death on Friday.

Serbia is currently facing the biggest health crisis since the epidemic erupted in March, recording record numbers of infections and deaths on an almost daily basis last week.

The health system is under great pressure, and since last week, there are no more hospital rooms for patients in Belgrade, the worst-hit city.

On Saturday, the government announced a ban on public gatherings of more than five people on Saturday.

The country's leading epidemiologist Predrag Kon warned that mass funeral attendance is a "epidemiologically unacceptable". But, he added, "It is something nobody can forbid."

The church had vowed to adhere to the sanitary measures, and while mourners were allowed in the church during the liturgy, they were banned from approaching patriarch's coffin.

But on Saturday, many worshippers crowded Saint Michael's Cathedral where the patriarch's body was displayed. Many of them kissed the cleric's plexiglass-covered coffin and took the communion traditionally given while sharing the same spoon.

"I am not afraid (of the virus). Faith is stronger than anything," Mladen Tosic, 32, told AFP while standing outside the church on Sunday.

The death of the 90-year-old cleric dealt a huge blow to the church, particular as the powerful Montenegrin bishop Amfilohije, considered its second-in-command, also succumbed to the disease in late October.

Three days after Irinej presided over his funeral, a ceremony during which safety measures were neglected, he was hospitalized after testing positive for Covid-19. His condition quickly deteriorated due to advancing age and chronic heart issues.

Irinej, the 45th Patriarch of SPC, was considered a moderate, and appeared open to mending centuries-old differences with the Roman Catholic church, even raising a possibility of a papal visit.

He had close ties with Serbian President Aleksandar Vucic, criticizing mass anti-government protests that erupted in Serbia in 2019. Vucic was among those who attended the funeral Sunday.

He also campaigned against the Serbia's former province Kosovo, when it declared its independence in 2008. Kosovo is home to important Orthodox monasteries and churches, which many Serbs consider their national and historical cradle.

"An era has ended," Vucic said in his funeral address.

"His greatest concern was Kosovo ... He acted rationally and with a cool head," he added.

The caretaker of church will be Bosnian bishop Hrizostom, and the new patriarch due to be named in next three months following elections.