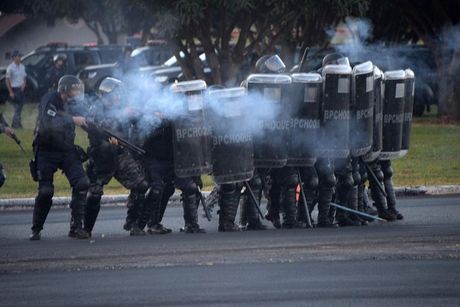 Brazilian police used tear gas and rubber bullets Monday to disperse protesters marching against the death of a black man beaten to death by white guards at a Carrefour supermarket.

Several days of protest have erupted in Porto Alegre, southern Brazil, after video footage last week showed 40-year-old welder Joao Alberto Silveira Freitas being punched in the face and head by a security guard while another guard held him.

Monday's march occupied a street and interrupted traffic in front of a Carrefour branch in the city.

A small number of protesters threw stones and fireworks at the police, who dispersed the group using tear gas and rubber bullets, AFP reporters witnessed.

Carrefour promised to earmark $5 million to fight against racism, saying that "we know that we cannot repair the loss of the life of Mr. Joao Alberto."

"This action is the first step by our company to combat prejudice and structural racism, which is urgent in Brazil, so that it gains even more strength and support from society," it said in a statement.

Carrefour has faced a wave of boycott calls and sometimes violent protests outside its stores across Brazil, drawing comparisons with the killing of George Floyd in the United States in May and the ensuing protests.

Carrefour chief executive Alexandre Bompard was swift to condemn the killing as a "horrible act," and sent his condolences to the victim's family and cut ties with the private security company that supplied the two guards.