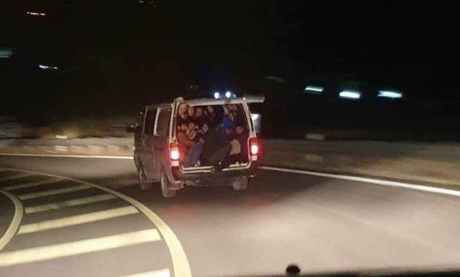 Locals in the northern town of Bsharri called on authorities Tuesday to evict all Syrians from the area a day after a Syrian citizen shot dead a local man in a personal dispute.

The announcement in the resort town came after a night of riots against Syrians in the town during which some homes of Syrians were reportedly torched and individuals were attacked in the streets. The army said that as of Monday night, troops had begun conducting patrols in the town, adding the accused killer surrendered to security forces and an investigation had begun.

The army said the killing came amid a dispute between resident Joseph Tawk and a Syrian citizen who worked at a home near a plot of land owned by the victim. Officials only identified the Syrian with his initials, M.K., and released no additional details on the dispute.

At some point, angry residents surrounded the town's main government building Monday night demanding that security forces hand the Syrian citizen over to them.

After the killing, church bells tolled and some residents went down to the streets demanding that all Syrian citizens be evicted.

"All Syrians who are staying in the town illegally must leave immediately," Bsharri Mayor Freddy Keyrouz said in a statement. He called on security forces to search the homes of Syrians in the town after it was reported the alleged shooter had a pistol.

Tensions are common in Lebanon between locals and Syrian refugees who have fled the war in their country. Lebanon at one point was hosting refugees equaling nearly a quarter of the country's population of 5 million, burdening Lebanon's crumbling infrastructure.

Tensions between Lebanese and Syrians also dates back to the days when Syria dominated its smaller neighbor for almost three decades with thousands of troops stationed in Lebanon. They withdrew in 2005 following the assassination of former prime minister Rafik Hariri, which sparked massive anti-Syrian protests.

A statement read in Bsharri by community members and aired on local TV stations called on local authorities to immediately "evacuate all Syrians who are currently residing in Bsharri whether they are workers, settlers or families until a mechanism is reached" on how to host Syrian workers in the town.

Many Syrians fled the town overnight and others were forced to leave by local residents, state-run National News Agency said.

This peasant mentality is what caused a lot of the problems in Lebanon. Are these fools aware that there are plenty of lebanese who have killed, raped and committed serious crimes around the world? Why didn't they ever call for the lebanese diaspora to be kicked out of its host countries based on the evil actions of its men? Fake followers of Jesus. Thinking they will get to heaven by wearing a cross while they are far away from the teachings of Jesus.

Only the criminal should be punished, not people who happen to have lived in the same country as him!!!

I could not agree more

You're completely right, it is ashamed , i was disgusted reading the article , and disgusted more
reading some of the comments here

Ado, thats the thinking of a backward peasant. You make it sound as if a quarter of the population in lebanon is raping and killing. According to your statistics, everyone in lebanon should have been raped and killed by now. And what does the amount of syrians in lebanon have to do with this crime?

Bigotry and racism indeed, not even in Africa when some minority Lebanese commit crime and kill locals does the government or the people say to kick all Lebanese out of Nigeria, or Ivory Cost etc...
The people of Bsharri are of course all upset and first reaction would be that, but who will do the dirty work that those poor Syrian souls are doing there ? A though for everyone who is being negative

There are a few things your missing in your comment. Your failing to address that syrian forces didnt leave lebanon until 2005. The same thing would happen in Nigeria or Ivory Cost if lebanon just got out of those places after invading them. Then a local gets shot by a "refugee" after the enemy left and tensions are high. The second thing you are failing to address is that it was a call to remove all illegal syrians from the village which would mean its a call to enforce the law and punish those who have committed a crime by staying there illegally.

so should they deport all Lebanese from Brazil?

I wrote this song in response to what happened yesterday in Bsharri...

Would you try if I cried
Would you cry if I died,
Look to the heavens way up above
Lebanese and Palestinians both need love

from Ale Taouk in Australia

lol @blacacabla
The Joke of the Day
Like Every Other Day