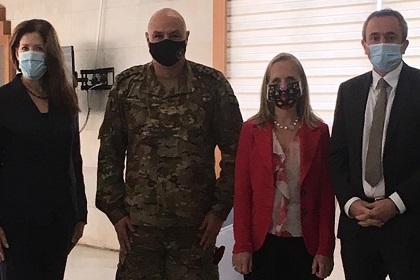 The joint border project has seen the deployment of four Land Border Regiments from the North in Arida to the south in Jebel Al Sheikh in Protected Border Observation Posts and Forward Operating Bases reinforcing “the authority of the State of Lebanon along its land border with Syria,” a British embassy statement said.

Following the meeting, Ambassador Rampling said: “I congratulated General Joseph Aoun on Lebanon’s 77th Independence and the role the Lebanese Army plays in safeguarding Lebanon and its people as its sole legitimate defender.”

“Lebanon is passing through a dangerous time in its history, and the political response is inadequate. The Lebanese Army plays a pivotal role in ensuring stability. The UK will continue to support the Lebanese Armed Forces,” he added.

“Our meeting today with the Lebanese Army command also saw the extension of our existing military partnership on the border until March 2022 which exemplifies the trust in the Lebanese Armed Forces and how they have managed to ensure state control of the border with Syria,” Rampling went on to say.

“The UK will continue to stand with the Lebanese people, and support a secure, stable, sovereign Lebanon, including a stronger and fairer economy, quality education for all, improved services, and enhanced security,” he added.

What a joke.. Lebanese army has no say with hizbiran.. coward Aoun and traitor Aoun

What a joke.. Lebanese army has no say with hizbiran.. coward Aoun and traitor Aoun