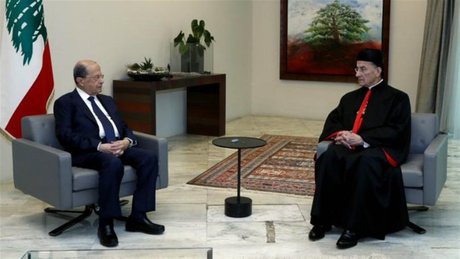 Maronite Patriarch Beshara al-Rahi on Wednesday held talks with President Michel Aoun at the Baabda Palace, ahead of a trip to the Vatican.

Speaking to reporters after the meeting, al-Rahi said the government must carry on with the forensic audit of the central bank’s accounts despite the announced withdrawal of New York-based firm Alvarez & Marsal.

“The audit must also involve all ministries and state institutions, starting by the central bank, in order to expose corruption. The investigation should not stop and should continue despite the withdrawal of the company tasked with carrying out this task,” the patriarch added.

As for the stalled cabinet formation process, al-Rahi pointed out that the government “cannot be formed in installments.”

“The constitution stipulates that the PM-designate should finalize the cabinet line-up before meeting with the president to finalize it together. Accordingly, the government’s formation cannot happen in installments: one piece today, another piece afterwards and another piece later,” the patriarch added.

Speaking to reporters after the meeting, al-Rahi said the government should continue with the forensic audit of the central bank's accounts, despite the announced withdrawal of New York-based company Alvarez & Marsal.
He means we should do it ourselves and not foreigners (at least we can determine the outcome)