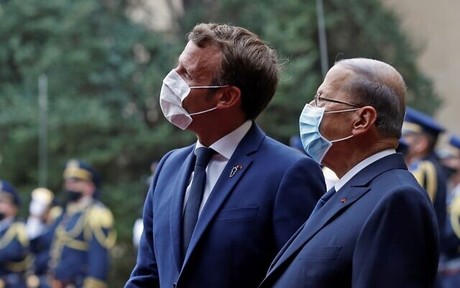 French President Emmanuel Macron called on Lebanese officials to put their own interests aside and work on achieving the interests of the people.

In a message to President Michel Aoun on Independence Day, Macron said Thursday “the demands of the Lebanese people in their uprising about a year ago is still achievable."

“It is your duty as head of state to respond to these demands, and to strongly urge all political forces to set aside their personal, sectarian and factional interests, in order to solely attain the supreme interest of Lebanon and the Lebanese people,” Macron addressed Aoun as saying.

Macron said solutions to the Lebanese crisis “lie in the need to implement the road map that all political parties committed to on the first of September.” And he urged the formation of a government “of qualified figures.”

Lebanese leaders are still incapable of agreeing on a government format, amid a failed forensic audit into the central bank’s accounts.

Lebanon’s parliament discusses Friday a letter addressed by Aoun to parliament, urging its intervention in the issue of forensic audit.

The History of Lebanon: Ruled by the Ottomans for 400 years, then patronized by the French, then so-called independence, ironically the constitution was blessed, and probably designed by the French on sectarian divide and rule basis; results? look at the past 70 years; majority of Lebanese do not tolerate other religions, biggest joke: officials always claim Lebanon is a free country for all religions. The lucky Lebanese are the ones who left the country.

Unfortunately, telling Lebanese politicians to set aside their sectarian interests is just like talking to a stone wall.
Not a single one of them would do this, for the future of Lebanon, but would rather listen to what their bosses tell them, in order to run Lebanon into the ground and ruin any future positive successful country.

the real indepence is when we are free from nasrla