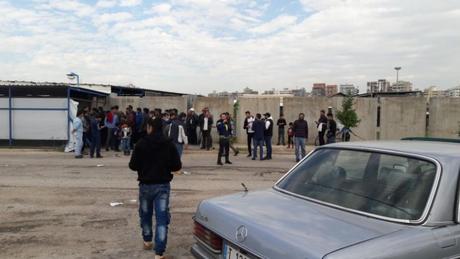 At least 270 Syrian families have left a north Lebanon town, as hostility towards them mounted over a murder allegedly committed by a Syrian national, the U.N. refugee agency said Friday.

The United Nations High Commissioner for Refugees condemned "collective reprisals against Syrians in the town," of Bsharri, saying many of the families fled in fear without taking their belongings.

"Collective punishment... for a whole community for an incident involving one individual is unacceptable," a UNHCR spokesperson said in a statement.

Many of those who fled the Christian-majority town said they were chased out by Bsharri residents after a Syrian on Monday was accused of shooting dead a Lebanese resident, sparking widespread tension and hostility.

Lebanon's official National News Agency reported forced evictions of Syrians in the wake of the murder, but Bsharri's mayor denied that the Syrians had left out of fear.

An AFP correspondent in Tripoli saw dozens of Syrian families gathering outside a UNHCR building in the northern city.

A group of young men in Bsharri "assaulted us, threatened us and started a fire" in the house, Umm Khaled, a 31-year-old Syrian mother of five told AFP.

"We picked up our children and ran away to Tripoli," located more than 40 kilometers east, she said.

Yassin Hassan, a 30-year-old Syrian who had lived in Bsharri for years, said he was beaten by a group of men.

"We ran away... without taking anything from our homes," he told AFP.

Tripoli is among the most welcoming destinations in Lebanon for refugees.

Lebanon, which is grappling with an economic crisis, says it hosts some 1.5 million Syrians, including around one million registered as refugees with the United Nations.

UNHCR said it received "a large number of refugees from Bsharri" in its Tripoli reception center.

They were encouraged to find alternative housing but those with nowhere to stay were moved to shelters, a spokesperson told AFP.

The reasons behind the murder that fueled anti-Syrian sentiments in Bsharri remain shrouded in mystery.

The Syrian suspect in question has handed himself over to authorities, the army said.

The mayor of Bsharri says the town is home to nearly a thousand Syrians.

"Collective punishment... for a whole community for an incident involving one individual is unacceptable," a UNHCR spokesperson said in a statement.

in the past days the people of Baalbek and Bsharri showed us a good example of the Lebanese mentality, attitude and culture

We need to send Bsharri to downtown. We have an issue with the government, Hezbollah and so called 'Lebanese' army