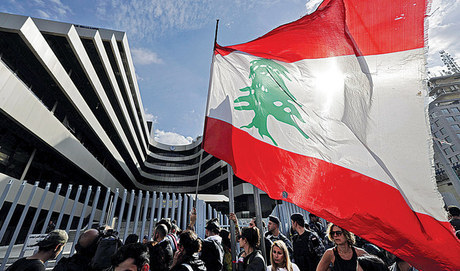 Lebanon's economy is sinking into a "deliberate depression", the World Bank said Tuesday in a damning report stressing the authorities' failure to tackle the crisis.

The fall 2020 edition of the Lebanon Economic Monitor predicted the economy will have contracted by 19.2 percent this year and projected a debt-to-GDP ratio of 194 percent next year.

"A year into Lebanon's severe economic crisis, deliberate lack of effective policy action by authorities has subjected the economy to an arduous and prolonged depression," a World Bank statement said.

Lebanon's economy started collapsing last year as a result of years of corrupt practices and mismanagement.

The crisis was made worse by a nationwide wave of anti-government protests that paralyzed the country late last year and the Covid-19 pandemic this year.

The August 4 Beirut port blast, one of the largest non-nuclear explosions in history, brought the country to its knees and further fueled public distrust.

"Lebanon is suffering from a dangerous depletion of resources, including human capital, with brain drain becoming an increasingly desperate option," the World Bank warned.

In 2020, Lebanon defaulted on its debt, banks imposed capital controls and inflation has reached triple-digit rates, dragging the country into its worst ever economic crisis.

Instead of taking emergency measures to rescue the economy, Lebanon's political elite has continued to dither and bicker.

The previous government headed by Hassan Diab failed to adopt ambitious policies to tackle the crisis. It resigned under pressure over the blast nearly four months ago and a new cabinet has yet to be formed.

He called for the quick formation of a new government capable of implementing short-term emergency measures and addressing long-term structural challenges.

"This is imperative to restore the confidence of the people of Lebanon," he said.

An annual index compiled by Gallup that tracks people's experience of stress and sadness said "no other country in the world saw negative experiences skyrocket across the board as much as Lebanon."