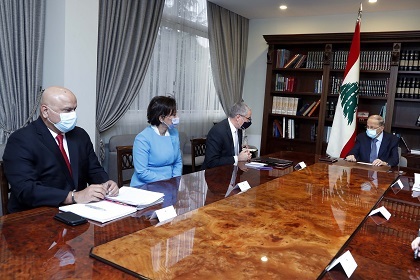 President Michel Aoun on Tuesday told a delegation from the U.N., the EU and the World Bank that the planned forensic audit of the public sector will “prove the state’s credibility towards the international community, especially donor countries.”

“This audit will make it possible to know how every dollar was or will be spent in Lebanon,” Aoun told EU Ambassador to Lebanon Ralph Tarraf, U.N. Deputy Special Coordinator for Lebanon Najat Rochdi and World Bank regional director Saroj Kumar Jha.

The meeting comes on the eve of a Paris-organized virtual international conference for supporting Beirut and the Lebanese people.

Aoun also welcomed the creation of a fund for the reconstruction of buildings damaged by the Beirut port explosion and the aid of those affected, noting that the priority is for homes, schools, hospitals and essential services.

French President Emmanuel Macron and U.N. Secretary-General Antonio Guterres will co-preside over the video conference, which will also include Lebanese nongovernmental groups and other organizations seeking to help.

I doubt very much Aoun the clown knows the meaning of the word "CREDIBILITY"... He is a joke

In the age of off-shore accounts, bitcoins, and record falsification, it is a joke to search records. Better to go after illicit riches starting with Bassil and Berri. Also how much taxes Hizbollah paid on all the arms from Iran, drug trade, and illegal crossings. Start investigation where it make sense and stop assuming all Lebanese are stupid. Aoun will live in infamy as the worst president ever that sold Lebanon to Hizbollah for 30 pieces of silver and destroyed the Christian community and all state institutions. He and Bassil should rot in prison!

We are all very proud of president Aoun as he is the only president who is fighting corruption, applying the dissociation policy, and balancing the budget/trade deficit. Great days lie ahead....

Just in case he isn't aware, THERE HAS BEEN NO FORENSIC AUDIT--JUST THE TALK OF ONE.