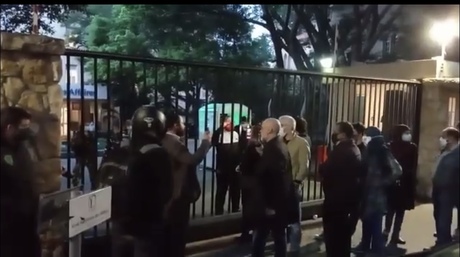 Anti-government protesters on Friday encircled the entrances of the ESA Business School in Beirut’s Clemenceau area during the presence of Central Bank Governor Riad Salameh in it.

“They started knocking on its metallic gates, which sparked a verbal clash with the School’s guards,” the National News Agency said.

The École supérieure des affaires (ESA) was stablished in 1996 following an intergovernmental agreement between France and Lebanon. It is managed by the Paris Île-de-France Regional Chamber of Commerce and Industry.

The faculty is composed of professors from Europe, particularly from ESCP Europe and HEC Paris.

I bet all his money is outside Lebanon