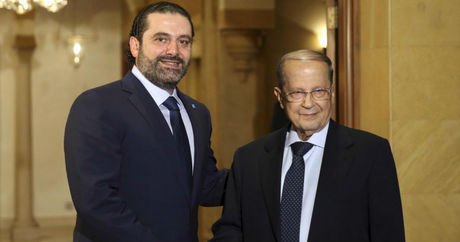 The government formation “gap” between President Michel Aoun and PM-designate Saad Hariri has not been eliminated during their meeting on Monday, which came as a move to “please” French President Emmanuel Macron before scheduled his visit to Beirut, Ad Diyar daily reported Tuesday.

The daily said Hariri’s meeting with Aoun came after a three week paused activity on the formation of a cabinet. It also came on the eve of French President Emmanuel Macron’s trip to Lebanon.

According to reports, no progress was recorded during the two men’s meeting. Hariri affirms the need to form a mission government compatible with the essence of the French initiative, while Aoun insists on the “unity of standards” and the “right” of the largest Christian parliamentary bloc (Strong Lebanon bloc) to name its own ministers in the new government.

Moreover, Aoun reportedly expected to receive a complete draft of an 18-minister government format from Hariri, including the names of the Shiite ministers, but that did not happen. This has necessitated another meeting on Wednesday, amid hopes that Hariri succeeds in overcoming the obstacles, said Ad-Diyar.

The PM-designate did not carry any names related to the Shiite duo, Hizbullah and AMAL, who have not suggested any names yet, awaiting the two leaders to agree first, it added.

“I was honored to meet with the president and I held discussions with him. I will return on Wednesday afternoon to specify a lot of essential things,” Hariri told reporters after the 30-minute meeting a day earlier

According to the al-Mustaqbal Movement sources, there was no breakthrough. “Yesterday’s meeting was the first in three weeks. The fact that this file has moved again is paramount. Setting a new meeting Wednesday gives time for both parties to review their positions,” they said on condition of anonymity.

According to them, Hariri will adhere to the implementation of the French initiative that calls for a reform-oriented government formed of specialists. He also has no wish to engage in debates delaying the formation, they say.

often I wonder, what kind of mentality do the Lebanese have? that they are proud to accept that foreign leaders set their agendas and dictate their policies. That's unbelievable! it is exactly when your neighbor is going to tell you how to furnish your house and how often can you go to bed with your wife ..... ridiculous