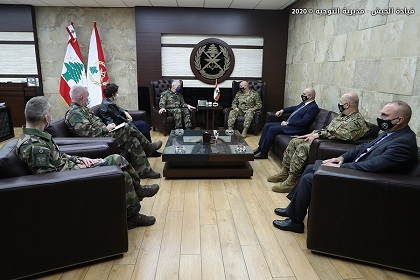 The meeting was held in the presence of French Ambassador to Lebanon, Anne Grillo, said NNA.

The agency said that talks featured high on the bilateral cooperation ties between the Lebanese and French armies.

Media reports said Lecointre’s visit came to compensate for the visit of French President Emmanuel Macron, which he canceled after retracting coronavirus.

His agenda will not include any activity towards political officials, but is limited to his meeting with the Army chief at a direct request from Macron to convey a special message from the French President, said al-Markazia Central News Agency.

According to unnamed sources, the message conveys the French state's insistence on considering the Lebanese army under its current leadership, a safety valve for Lebanon, with emphasis on France's permanent and continuous support.

France aims to make clear that its main reliance is on the Lebanese Army and its role in this difficult time in Lebanon's history, the added.

God bless Shia approved and appointed Lebanese Army chief, General Joseph Aoun for meeting with the Chief of Staff of the French Armies General François Lecointre. General Joseph Aoun like President Aoun before him protects the back of the resistance and blesses its war on terrorism in Syria, Iraq and Yemen. He has done everything in his capacity to facilitate the movement of our Shia fighters in and out of Lebanon along with their weapons.

General Aoun is working on the final details of a joint plan to integrate the Lebanese Armed Forces into our Shia resistance under the command of the Islamic Republic of Iran.

So a question to Lebanese Christians: how do you plan to return Palestinian refugees back to Palestine? Through diplomacy? Because there is no way on earth the Israelis would ever take them back since they further dilute the Jewish population and would hence make for an existential threat; just like they are for Lebanese Christians. So to Lebanese Christians: what do you want preserve? The Christendom of Lebanon, or the Jewishness of Palestine? It is a binary choice. And if it's Lebanon, then the only way to return the refugees is through a strong military.