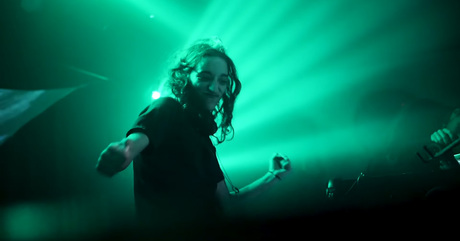 Rights groups on Tuesday demanded that Palestinian authorities free a woman disc jockey arrested after a dance event at a Muslim religious site near the West Bank city of Jericho.

Palestinian Authority police arrested Sama Abdulhadi, 30, on Sunday, the day after she performed at Nebi Mussa, the traditional burial place of Moses under Islamic tradition.

Ammar Dweik, director of the Independent Palestinian Commission for Human Rights, said that she was remanded in custody on Tuesday for a further 15 days.

Her family said in a statement that an application for bail was rejected.

She is considered by many to be the first Palestinian woman to have become a professional disc jockey and Israeli daily Haaretz called her the "Palestinian Techno Queen."

Dweik, whose organization was founded by the PA, said that Abdulhadi had official permission for the event at Nebi Mussa.

"We asked today for her release because her arrest is not logical," he told AFP. "She had received an authorization from the ministry of tourism."

"Nebi Mussa is not only a religious site but also a tourist site," he said. "If electronic music was not appropriate for it, the ministry should not have given its authorization."

Video of the event posted on social media showed men and women dancing together at the gathering, sparking public anger and accusations of desecration of the site, where there is a mosque.

The event, one comment on Twitter said, "is really disgusting. It is an insult to the three (monotheistic) religions."

"How dare a bunch of liberal Palestinians party at the Nebi Mussa mosque?"

At one point, men entered the site and pushed participants out.

The event also took place despite coronavirus restrictions in force in the West Bank.

At the request of Palestinian Prime Minister Mohammed Shtayyeh, a commission of enquiry was set up "to determine what happened at Nebi Mussa."

Shawan Jabarin, general director of Palestinian rights group Al-Haq, slammed the "arbitrary arrest" which he said was aimed at satisfying a section of Palestinian opinion.

Asked by AFP for comment, police said the case was in the hands of the government.

A government official said that he could not comment as the issue was subject to the ongoing commission of enquiry.

This shameless techno queen was not arrested by bedouins and Islam is not a cult. It is the religion of all the Prophets starting from Adam. Prophet Muhammad was the last Messenger and Prophet sent to mankind and his message was the same as all the Prophets, they only had some varieties in laws and not in main beliefs. Unlike heretics like you who have left the teachings and respect of the prophets whether Abraham, Jesus or anyone else, we Muslims still respect them. Not that i believe you are a christian even if you see yourself as one, but do you really believe Prophet Moses, Abraham, Jesus or any other prophet would allow techno parties? You probably do since you are misguided by satan. If the world was at peace with the maronite (who is originally syrian kicked out by the syrian orthodox yet hates his own origin), then the maronite would be at war with himself. Don't throw stones if you're sitting in a glass house.