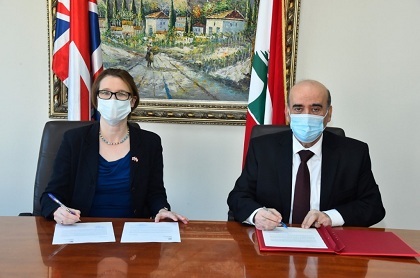 Lebanon and the United Kingdom of Great Britain and Northern Ireland on Thursday exchanged MoUs in completion of a number of necessary legal procedures to put the partnership agreement between the two countries into effect as of 01/01/2021.

According to a statement, the new post-Brexit MoUs aim to regulate the legal framework of trade ties that had been previously established by a partnership agreement between Lebanon and the European Union.

The MoUs aim to safeguard consumer confidence, as well as that of British and Lebanese companies, in a bid to continue their trade deals and to preserve trade-related preferential terms between both parties.

Moreover, the MoUs aim to open future prospects for expanding trade exchange in goods and services between the two countries, thus providing additional opportunities for Lebanese exporters in light of Lebanon's efforts to strengthen its productive sectors.

In this framework, UK Chargé d'affaires Alyson King said, “I am delighted that the UK-Lebanon Association Agreement is now in force. This agreement provides certainty and confidence to both UK and Lebanese businesses. Both countries highly value the bilateral trade relationship and today’s agreement provides a firm platform for doing more business together in the future.”