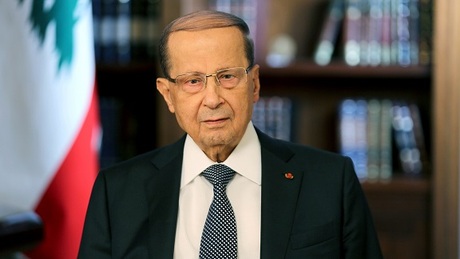 President Michel Aoun on Sunday stressed that Lebanon has sovereignty over its border and territory, in an apparent response to controversial remarks by a top Iranian general.

“The Lebanese have no partner in preserving their country’s independence, its sovereignty over its border and territory, and the freedom of its decision,” Aoun said in a tweet.

Brigadier General Amir-Ali Hajizadeh, the chief of the Aerospace Force of the Islamic Revolutionary Guard Corps of Iran, had told Hizbullah’s al-Manar TV on Saturday that “all the missile capabilities that Gaza and Lebanon possess were achieved through Iran’s support.”

“They are the frontline for the confrontation” against Israel, he added.

Does he consider his statement a response? Laughable!

Iran flat out said Lebanon under hezbollah as an iranian statelet and will be used anytime Iran so wishes and aoun resends by saying: "The Lebanese have no partner in preserving their country’s independence, its sovereignty over its border and territory, and the freedom of its decision,”

Notice how he omitted to mention the Lebanese state and instead he used 'the Lebanese' which is an indirect indication to including hezbollah activities.

Aoun is more than a Useful Idiot, a premeditated assassin of a country. Hizbollah is created, armed, financed and indoctrinated by Iran radicals, and therefore by definition a foreign agent and an invading militia. Since 2000, Iran wants to equip Hizb with high precision rockets to create a balance of terror with Israel to serve as an attack dog for its nuclear aim and regional hegemony. This is certainly a kiss of death to Lebanon that prospers with its tourism, democracy and freedom that attracted western firms with their good paying jobs. Aoun knew the risks but sold Lebanon for 30 pieces of silver. Aoun is a curse on Lebanon as much as Hizb is a curse on Shia. They destroyed a country that had by far the best potential in the region. Their day of reckoning is coming! Anyone supporting Aoun or Hizb is a traitor.

He never mentioned the Lebanese state! So, yes hezbollah is a partner in preserving the country's independence according to this sell-out.

Aoun is a disgrace. He is the weakest President of the lebanese History!

he is not weak at all. He is a traitor!

You are right janoubi. He is a traitor!

He is worse than a traitor

Aoun can say whatever he wants, the fact sadly remains that Iran considers Lebanon as its anti-Israel front-line satellite.

So, if Hizballah decides (is ordered) to attack Israel from north of the border then Israel will have no qualms in hitting back hard as none other than President Aoun himself has virtually stated that there is no such thing as an independent Republic of Lebanon, but rather an Iranian province in that area.

there are major religious, social and political chasms that divide Jews( Haredim, Datiim,Masortim,Hilonim)in Israel, The government of Israel don't mind having Hizbala as enemy in fiction it distracts from the internal frictions, and keep the nation vigilant, Iranian regime and Israeli regime need each other, both are misleading their own people.

i am in agree

Iran is a clearly a cancer that will fight until the last Lebanese or Palestinian.