Hariri Tweets on 'Cheating' after Aoun Caught Accusing Him of 'Lying' 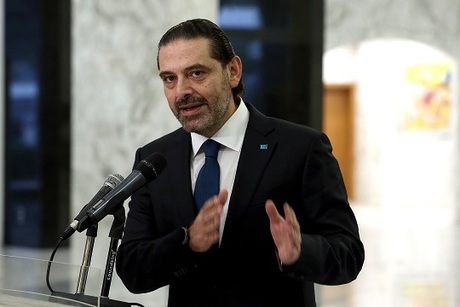 Prime Minister-designate Saad Hariri on Monday tweeted a bible verse about “cheating” after President Michel Aoun was caught on camera saying the PM-designate has “lied” about being given a cabinet line-up “paper” by the president.

“There is no formation. He says that we gave him a paper. He’s lying,” Aoun tells caretaker PM Hassan Diab in remarks caught by al-Jadeed TV’s camera. The president’s answer came in response to a question by Diab about the cabinet formation process.

“He has made statements containing lies and now notice how much he has been absent. Notice how much the luck of the Lebanese is bad, and now he has gone to Turkey, I don’t know what difference that will make,” Aoun added in the leaked remarks.

"a statement by the Lebanese Presidency stated that President Aoun received from Hariri a list of 18 cabinet members, and that in return, the president handed Hariri an integrated proposal on the upcoming government" 9/12/2020

Cheating ? I know a cheater when i see one. Scoffs Candice.

A politician lying and cheating?? Never heard of such a thing!

Nobody feels sorry for you. You knew everything about Aoun and Bassil before you made the deal with them.. Now, sit back and enjoy it while they wipe the floor with you, loser.