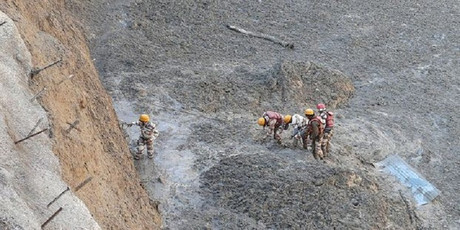 Eighteen people were confirmed dead on Monday and at least 200 others were missing after a devastating flash flood in India thought to have been caused by a chunk of glacier breaking off.

"There was a cloud of dust as the water went by. The ground shook like an earthquake," local inhabitant Om Agarwal told Indian TV.

The Uttarakhand state government said on Monday 18 bodies have been recovered, and chief minister Trivendra Singh Rawat said at least 200 people were still unaccounted for.

Most of those missing were working at the two power plants. Some were trapped in two tunnels cut off by the floods and by mud and rocks.

"If this incident happened in the evening, after work hours, the situation wouldn't have been this bad as labourers and workers in and around the work sites would have been at home," Rawat told reporters.

Twelve people were rescued from one of the tunnels on Sunday but 25-35 more were still trapped in the second one, state disaster relief official Piyoosh Rautela told AFP.

With the main road washed away, paramilitary rescuers had to scale down a hillside on ropes to reach the entrance. Emergency workers were using heavy machinery to remove tonnes of rocks.

Scores of social media users captured the disaster, with footage showing water tearing through the narrow valley with terrifying force.

"We were 300 meters inside the tunnel working. Suddenly there was whistling and shouting telling us to get out," said survivor Rajesh Kumar, 28.

"We started running out but the water gushed in. It was like scenes from a Hollywood movie. We thought we wouldn't make it," he told AFP.

Authorities said initially that the cause was a chunk of glacier breaking off into a river, but the trigger may instead have been a phenomenon called a glacial lake outburst flood (GLOF).

This is when the boundaries of a glacial lake -- formed when a glacier retreats -- are breached, releasing large amounts of water downstream.

It is possible that this in turn was caused by an avalanche. The incident may also have been triggered by water pockets inside a glacier bursting.

Glaciers in the region have been shrinking rapidly in recent years because of global warming, but experts say that the construction of hydroelectric plants could also be a factor.

Floods in 2013 killed 6,000 people and led to calls for a review of projects in Uttarakhand, a state of 10 million people bordering Tibet and Nepal.

Vimlendhu Jha, founder of Swechha, an environmental NGO, said the disaster was a "grim reminder" of the effects of climate change and the "haphazard development of roads, railways and power plants in ecologically sensitive areas".

A major study in 2019 said that two-thirds of Himalayan glaciers, the world's "Third Pole", could melt by 2100 if global emissions are not sharply reduced.

Glaciers in the region are a critical source of water for hundreds of millions of people, feeding many of the world's most important river systems.