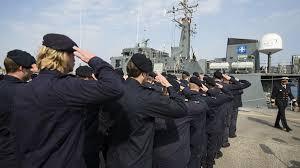 Russia on Thursday claimed Norway was becoming the site of a military build-up on its frontiers ahead of the arrival this month of U.S. bombers for exercises.

"We certainly can't talk of calm when tensions are rising on Russia's borders and a powerful parade-ground is forming for military operations against our country" Foreign Ministry spokeswoman Maria Zakharova told reporters in Moscow.

Zakharova claimed the Norwegian-U.S. cooperation was "the latest in a series of similar events", highlighting the "permanent" presence of "American, British and Dutch" marines in northern Norway.

She also noted a "port for maintaining American nuclear submarines" near Tromso.

"Such activities by Oslo threaten regional security and end the Norwegian tradition of not allowing foreign military bases on its territory in peacetime," Zakharova said.

Europe's far north has in recent years seen levels of military activity unprecedented since the Cold War, as tensions grow between Russia and the West.

A US aircraft carrier was in 2018 sent to Norway for the first time since the 1980s, while the following year surface combat ships entered the Barents Sea in Russia's exclusive economic zone.

Norway's neighbor Sweden has announced a massive increase in military spending, even though it does not itself belong to NATO.

Moscow itself has announced that it will build new bases and has deployed military units further and further afield, as melting ice increasingly opens the Arctic to navigation.