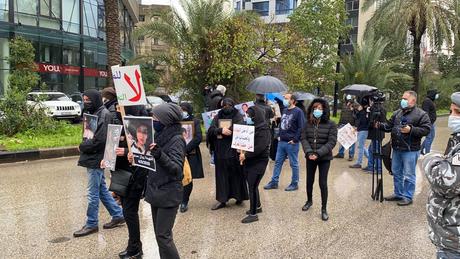 Relatives of the Beirut port blast victims held a protest for the second day on Friday and blocked traffic in Riad el-Solh highway after a decision that recused judge Fadi Sawwan off the case.

On Thursday, a dozen family members held a protest and blocked traffic, burning tires outside the Palace of Justice.

The Court of Cassation called for a new investigating judge to be appointed to lead the probe, nearly six months after it had started.

The development is likely to further delay the investigation into the horrific explosion that killed more than 200 people, wounded over 6,000 and disfigured much of Beirut. Families of the victims and survivors have accused the ruling political class of corruption and negligence that led to the explosion of ammonium nitrate, a dangerous chemical stored in the port for years.

Judge Sawwan had accused and summoned for questioning Lebanon's caretaker prime minister and three former ministers on suspicion of negligence that led to the deadly explosion.

People protested Sawwan’s recusal amid skepticism of a transparent and independent investigation into the Aug. 4 explosion, in a country where a culture of impunity has prevailed for decades.

On February 15 2021 Judge Sawwan began to follow leads on the involvement of Syrian businessmen George Haswani and brothers Imad and Mudalal Khoury, who are close to the Bashar Assad regime. Sawwan lost his job a few day later.
Haswani and Imad Khoury owned Savaro Ltd, the company that, in 2013, procured the Ammonium Nitrate shipment that exploded in Beirut. Furthermore Mudalal Khoury had attempted to procure ammonium nitrate in 2013. The blast in Beirut port was caused by some 500 tons of the original 2750 tons ammonium nitrate stored in hangar 12. What happed the missing 2250 tons? Who controlled the Beirut port? Was Sawwan stumbling on the truth? Who can intervene to fire Sawwan?

‘’ Who can intervene to fire Sawwan?‘’. The Shia terrorists and their Christian partners in crime.