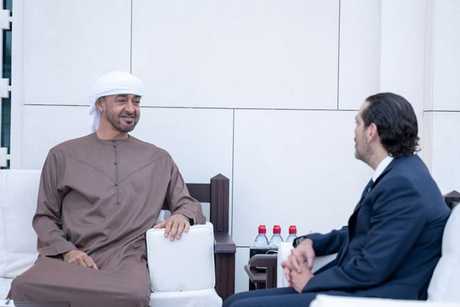 “During the meeting, discussions focused on the bilateral relations and a number of regional and international issues of mutual interest, in addition to the Covid-19 pandemic, its repercussions on all levels and ways to contain them.

Premier Hariri briefed Sheikh Mohammed on the latest developments in Lebanon, especially those related to the formation of the new government.

Abu Dhabi Crown Prince expressed his sincere wishes for the formation of a Lebanese government that takes into account the national interest, surpasses differences and is able to overcome the various challenges surrounding Lebanon.

He affirmed the UAE's support for the Lebanese people to fulfill its aspirations for unity, stability and development.

For his part, Premier Hariri congratulated Sheikh Mohamed bin Zayed on the success of “Hope Probe” in reaching Mars orbit. He also praised the UAE's constant stances in support of Lebanon, and its assistance to face the coronavirus pandemic, wishing the Emirates and its people safety from all harm.”