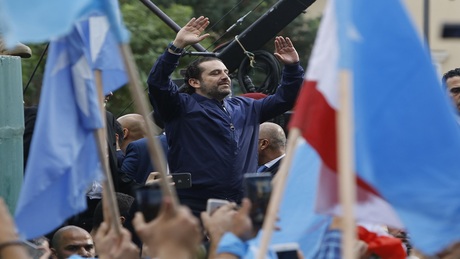 “His lengthy speech today about the government, the constitution and standards was a repetition of stances that carry nothing new and which do not make the slightest breakthrough in the face of obstruction and impediment,” Mustaqbal said in a statement.

“He blamed his own failure, obstruction, suspension of constitution, treachery, backstabbing and lack of loyalty on PM-designate Saad Hariri to hold him responsible for the dilemma that the presidential tenure and its political party are suffering,” the Movement added.

“This person is still living in la-la land and placing the presidency under house arrest through his denial of the changes that emerged after October 17 and through considering that PM Saad Hariri’s resignation and his response to the popular protests were an act of political treachery,” Mustaqbal said.

Lamenting that Bassil’s remarks suggest that “the presidency’s decision has moved from the Baabda Palace to the Mirna Chalouhi Center” and that Bassil is posing as “the exclusive spokesman of the ‘strong presidential tenure,’” Mustaqbal said Hariri will only deal with what President Aoun will directly say.

I still remember our La-La land....

Did he just discover that? As if he was not aware of Aoun's character and Bassil's destructive ambition when he made the deal with them and changed the election law.