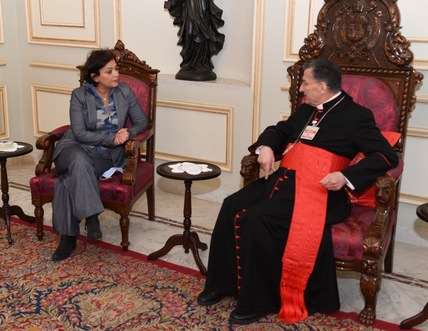 Rushdi indicated that her visit came in the context of the Patriarch's call for an international conference for Lebanon.

Rahi has often criticized Lebanon’s “incompent” ruling authority and called for organizing a “U.N.-sponsored international conference on Lebanon to prevent attacks on it and prevent harm to its legitimacy and to put an end to the multiplicity of arms.”

Lebanese leaders have been unable to form a much-needed government to pull Lebanon out of multiple crises gripping the country, including an unprecedented economic crisis and the impact of one of the biggest non-nuclear explosions that devastated its capital's port.

I think they are having pain in the neck, just by looking at each other.