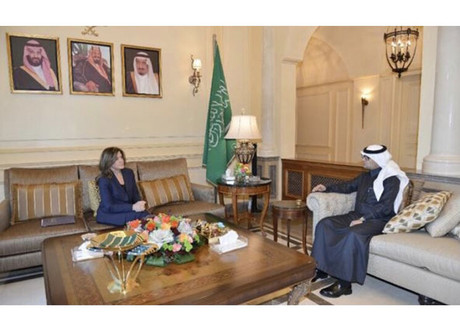 Diplomatic and political sources told al-Joumhouria newspaper the meeting gains significance, “it is an exceptional meeting in timing and content,” they said on condition of anonymity.

Although their discussion came within the framework of Bukhari’s meetings with Arab and Western diplomats that focused on the situation on the Lebanese arena, Bukhari’s meeting with Shea reportedly has special significance mainly that it “dwelled into the details of the government crisis in Lebanon,” according to the sources.

The two ambassadors have reportedly agreed to continue their consultations on the Lebanese file in the next stage.

Lebanese leaders have been unable to form a much-needed government to pull Lebanon out of multiple crises gripping the country, including an unprecedented economic crisis and the impact of one of the biggest non-nuclear explosions that devastated its port’ capital.

The crisis has pulled international, western and Arab calls urging leaders in Lebanon to act on their commitment and speed the formation, also urging rapid results on the inquiry into the causes of the explosion.