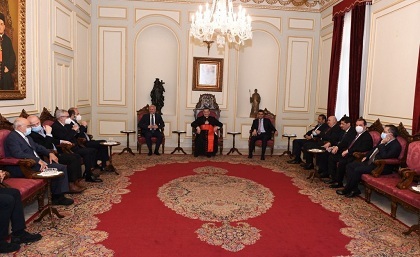 A delegation of the Lebanese Forces, Strong Republic parliamentary bloc met with Maronite Patriarch Beshara el-Rahi in Bkirki on Wednesday in a stand of solidarity with his calls to “internationalize” the problematic Lebanese file.

“The ruling authority in Lebanon has turned into a murder machine and has relinquished its duty to protect its people after the Beirut port blast,” said the LF statement recited by its MP Antoine Habshi.

“The Lebanese people’s will must be respected through a generation of a new ruling authority and early parliamentary elections,” added the statement.

The LF stressed the need to support and “keep pace with the Patriarch’s proposal to resolve the conflict between right and wrong,” adding that the people’s choice is clear when they have to choose between the “culture of death and the culture of life.”

“We are living in “hell” because Lebanon has been thrown in the furnace of the Iranian-American conflict which necessitates the need to resort to the international community to demand his right to live because Lebanon is being used as a tool and hostage.”

Neutrality is the only way out. Cedar Revolution I was successful in kicking Assad's forces out without firing a shot or vandalizing any store because over one million ordinary Lebanese (silent majority) demonstrated with a common theme despite Assad's many Lebanese politician working as his agents. CR I failed once political parties misappropriated its slogans. The spring is coming and Covid is being contained worldwide. Thawra should stop all minor demonstrations until the spring or summer for one massive demonstration “CR II” along Batrak positive neutrality theme and no arms outside army. Meanwhile, Thawra should connect with diaspora and develop a comprehensive reformist-political-economic-social plan and initiate high-level contacts with major countries and organizations as well as world bank in preparation for next election, Lebanon only path to salvation and restoring its resala.