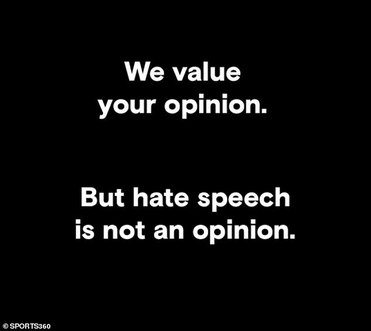 Bundesliga stars have taken part in a hard-hitting, multi-language video which draws attention to the problem of hate messages on social media platforms.

"Cyber bullying is a problem that affects our entire society," said Real Madrid and Germany midfielder Toni Kroos, who took part in the video.

"What some people allow themselves to do behind anonymous profiles is way below the belt, sometimes it's even criminal."

The video was produced by a studio in Berlin for the Sports360 agency, which advises the footballers involved.

"I hope you die in hell," Kroos reads in English, while a copy of the post - with the username blanked out - appears on the screen.

In a later segment, Suele reads out in German: "I hope you break all your bones".

The video ends with the message "We value your opinion. But hate speech is not an option. There is a human behind each screen. Let us #UniteAgainstHate."

All the messages read out are sinister, but one aimed at Germany goalkeeper Ron-Robert Zieler, a 2014 World Cup winner, is particularly chilling.

"Be like Enke and throw yourself in front of a train," the 32-year-old reads out in German - a reference to Robert Enke, who killed himself in 2009.

Another added: "We know where you live and where your kids go to kindergarten."

The Cologne keeper admitted it had been "an effort" to read out the abuse he received.

"Such comments can really affect everyone", he added, "from young to old, school kids as well as adults."

"Social media platforms have to find a way to abolish anonymity on the net," Kroos added.

"Everyone who has a profile should show their face, which should be recognizable. It should no longer be possible to rabble-rouse anonymously."