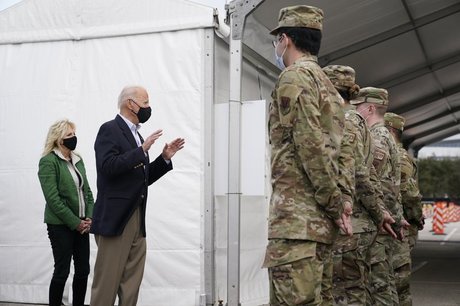 President Joe Biden said Friday that a US air strike against an Iranian-backed militia in eastern Syria, the first since he took office, should be seen by Iran as a warning.

Asked what the message was from the air strike, Biden said: "You can't act with impunity."

"Be careful," he added, speaking in Houston during a tour of relief efforts after a huge winter storm in Texas.

Syria and Iran on Friday condemned the attack with Damascus calling it a "bad sign" from the new Biden administration and Tehran saying it would further destabilize the region.

Pentagon spokesman John Kirby said two F-15E "Strike Eagles" dropped seven precision-guided munitions on Thursday on facilities in eastern Syria used by the militias believed to be behind a spate of rocket attacks on US troops in Iraq.

"He's going to act to protect Americans and when threats are posed, he has the right to take an action at the time and in the manner of his choosing," Psaki said.

Secretary of State Antony Blinken said the administration wanted to make it "very, very clear -- notably to Iran-- that they cannot act with impunity against our people, our partners, our interests.

"And I think -- and expect -- that that message was clearly received," Blinken said.

"It is a bad sign regarding the policies of the new US administration which should adhere to international (norms)," the foreign ministry said.

The Iranian foreign ministry strongly condemned what it called "illegal attacks" that are a "clear violation of human rights and international law."

The air strikes would lead to "intensifying military conflicts and further destabilize the region," the foreign ministry spokesman said.

It said US warplanes hit three trucks loaded with munitions coming from Iraq near the Syrian border town of Albu Kamal and destroyed border posts of the Hashed, an umbrella group that includes small militias with ties to Iran.

Kirby said the Pentagon had received "preliminary details" about casualties but declined to release any figures.

It was the first US military action targeting such groups since Biden took office five weeks ago and came just as Washington had opened the door to resuming negotiations with Tehran over its nuclear program.

Kataeb Hezbollah said one of its fighters was killed and slammed the strike as a "heinous crime in violation of international law."

Kirby said Iraqi and Kurdish partners had provided intelligence that led to the identification of the groups behind the rocket attacks.

Iraq's defense ministry denied the US had coordinated with it to conduct the strike, saying it only works together with the US-led coalition in the fight against the Islamic State group.

"It is very important for us to understand the United States' strategic line on the ground," Lavrov said.

Kirby responded to criticism by Lavrov that Moscow had been notified just four or five minutes before the US struck the targets.

The US action followed three rocket attacks on facilities in Iraq used by US and coalition forces fighting IS.

One of those strikes, on a military complex in the Kurdish regional capital Arbil on February 15, killed a civilian and a foreign contractor working with coalition forces, and wounded several US contractors and a soldier.

Last week, the Biden administration offered talks with Iran led by European allies as it seeks to salvage a 2015 nuclear deal, left on the brink of collapse after Biden's predecessor Donald Trump withdrew from it.

But the new administration has also made clear it would not brook "malign activities" by Iran.

Iran is believed to be searching for an opportunity to avenge the US assassination of top general Qasem Soleimani one year ago.

Soleimani, a senior Revolutionary Guards commander, was Iran's key liaison to its allies in Iraq and Syria, and elsewhere in the region.

He was killed in a US drone strike just as he arrived in Baghdad for meetings with top Iraqi officials.