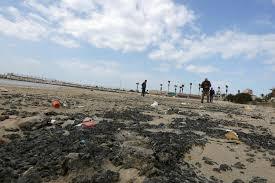 Lebanon's Foreign Ministry on Tuesday moved to file a report with the U.N. in which it asked for technical assistance in the face of a Mediterranean oil spill that has contaminated at least half of coastline.

The report, prepared by the National Council for Scientific Research at the request of caretaker PM Hassan Diab, highlights the magnitude of the damage, describes it as an environmental disaster and warns that the recovery could take several years, the National News Agency said.

The report also calls on the U.N. to “determine the reasons behind this spill and identify the culprit so that Lebanon can demand compensations for the severe environmental damage it has incurred.”

“This is considered an environmental disaster and (Lebanon) has no ability to address it and contain its protracted damage” on its own, the report says.

MP Enaya Ezzeddine of the Development and Liberation bloc has said that the amount of tar that has polluted the sand beaches of south Lebanon in recent days has been estimated to be at around two tons.

“The cleaning process will be arduous and painstaking and it requires followup and cooperation between municipalities, scout associations and local, national and international NGOs and environmental groups,” Ezzeddine added.

Lebanese on Saturday raked balls of tar away from a turtle beach in the South after a massive slick washed ashore after hitting neighboring Israel.

A storm more than a week ago threw tons of the sticky, black substance onto the beaches of Israel, apparently after leaking from a ship.

Within days the spill had spread to south Lebanon, where clumps of tar contaminated beaches stretching from the border town of Naqoura to the southern city of Tyre, all the way to the capital Beirut.

The swathe of coastline, which includes some of the country's best preserved beaches, is a nesting site for turtles which usually appear later in the year.

On Saturday morning, mask-clad volunteers and members of the civil defense sifted blobs of tar out of sand on the beach of the Tyre Coast Nature Reserve, an AFP journalist said.

As well as endangered loggerhead and green sea turtles, the beach provides shelter for the Arabian spiny mouse.

Mouin Hamze, the head of the National Council for Scientific Research, has said that the pollution could continue washing up on Lebanese shores for up to three months.

A survey of the area using drones is not yet complete, but he said the damage was extensive in the South while tar had even landed on the beach further north in the capital Beirut.

Israeli authorities said Sunday they had cleared a Greek tanker of suspicion in relation to the oil spill that caused the massive tar pollution.

Powerful winds and unusually high waves pummeled Israel's entire Mediterranean coastline on February 17, with tons of tar staining 160 kilometers of beach from its borders with the Gaza Strip to Lebanon.

According to Israel’s Environmental Protection Ministry, there are "dozens" of vessels under suspicion, with Israeli inspectors, aided in some cases by international bodies, already ruling out around 10 of them.

The ministry said in a Sunday statement it was monitoring, with the help of the Israeli air force, a stain in the sea some 150 kilometers offshore that could be oil.

Lebanese authorities want money, they don’t care about the environment or else they’d ask for equipment to clean the sands and the bottom of the sea.