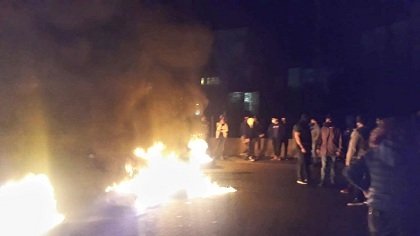 The Lebanese pound was trading at nearly 10,000 pounds to the dollar on the black market on Tuesday.

Angry protesters took to the streets Tuesday across Lebanon over a deepening economic crisis that has thrown more than half of the population into poverty.

In the morning protesters in North Lebanon blocked various roads as the wave grew extending at noon to South Lebanon, the capital Beirut and the eastern Bekaa region.

The pound had been pegged to the dollar at 1,500 since 1997, but the country's worst economic crisis since the 1975-1990 civil war has seen its unofficial value plummet.

Before the latest downturn, the pound had briefly stabilised at 8,000-8,500 to the greenback in recent weeks.

As part of a series of demands, it had given them a Sunday deadline to increase their capital by 20 percent.

The Lebanese pound was trading at nearly 10,000 pounds to the dollar on the black market on Tuesday.
The forces unhappy with the support Al Ra3i's getting showing their teeth.

It has all to do with a lack of productive economy.