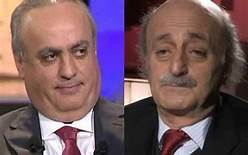 Wahhab and Jumblat “stressed that the Lebanese Army should be fully in charge of addressing the Kfarhim incident,” emphasizing that “the security of Mt. Lebanon and its residents is a red line,” a statement issued by the Tawhid Party said.

They also underlined that no one enjoys a political cover, the statement added.

Media reports quoting security sources have said that the clash erupted as young men loyal to Wahhab were blocking the Kfarhim roundabout.

“A clash erupted with young men who support the PSP and the incident involved gunfire and the use of knives,” the sources said.

They are willing to sacrifice their lives for a warlord/mafiaboss who usually offers nothing in return.

It appears that the person who censored my post disagrees that walking around with knives and guns is thuggish.

Allah yi se3id libnen, perhaps a thorough investigation should be conducted within your employees and do a little cleanup... because this kind of belief should not be tolerated.