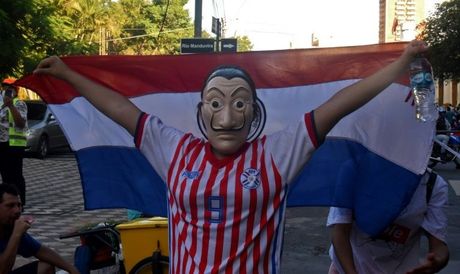 Protestors angry over the Paraguay government's handling of the coronavirus crisis clashed with police late Friday, with shops ransacked and cars set on fire.

Police fired tear gas and rubber bullets as clashes in the center of the capital Asuncion left around 20 injured, according to AFP estimates.

Protestors rallied earlier outside the Congress building to demand the resignation of President Mario Abdo Benitez.

Health Minister Julio Mazzoleni, who has been under attack from lawmakers, including some from the ruling party, and by health worker unions, submitted his resignation, which he made public on Friday after a meeting with the president.

On Thursday, the Senate adopted by 30 votes out of 45 a resolution calling for Mazzoleni to step down.

The coronavirus epidemic is expanding in Paraguay and officials admit the threat is grave.

"We are in a critical situation," said health ministry spokesman Hernan Martinez.

"Let's avoid crowds. It is the only thing that can save us from the collapse of healthcare."

Hospitals were "working hard" but "the situation is complicated," said pulmonologist Carlos Morinigo.