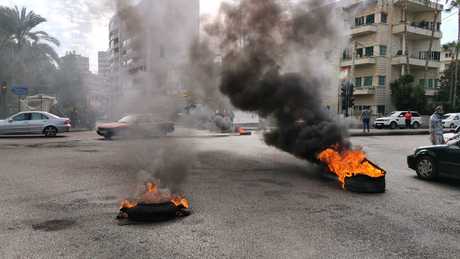 Lebanese demonstrators pressed on with their road-blocking protests on Sunday as the political stalemate continued in the country.

In Beirut, protesters blocked the roads leading to Martyrs Square with burning tires.

The highway linking Beirut to the South was meanwhile blocked for a few hours in the Jiye area.

Protesters also blocked the Elia roundabout in Sidon and the army was trying to reopen it.

The National News Agency said young men were burning tires there in protest at the dire living situations and the surge in the dollar exchange rate.

In the North, protesters blocked the Minieh international highway at the Bhannine intersection, placing trucks, rocks and tires in the middle of the road.

“Motorists between Tripoli, Minieh and Akkar had to take alternative routes,” NNA said.

In the Akkar Plain area, protesters blocked the Abdeh-Abboudiyeh international highway with burning tires, demanding “the trial and punishment of all officials who have impoverished and starved the people.”

In the Bekaa, protesters blocked roads in Saadnayel and Taalabaya as activists in Baalbek staged a sit-in at the Khalil Mutran Square, denouncing the deterioration of the economic, social and financial situations.

“The Decision is for the People”, read a banner carried at the rally as protesters chanted slogans demanding accountability.

Elsewhere, protesters blocked the Chanay road in Aley and the Choueifat road at the Tiro intersection, an area where a motorist ran over several protesters with his car overnight prompting their comrades to smash and torch his car.

The currency has continued its rapid collapse against the dollar, trading at nearly 11,000 Lebanese pounds on the black market on Saturday for the first time in its history.

Angry protesters have blocked streets and highways across the country with burning tires for the past several days.

The crash in the local currency has resulted in a sharp increase in prices as well as delays in the arrival of fuel shipments, leading to more extended power cuts around the country, in some areas reaching more than 12 hours a day. The crisis has driven nearly half the population of the small country of 6 million into poverty, wiped out savings and slashed consumer purchasing power.

"The dollar is 10,500 (pounds) and everyone has four or five children on their neck, including their parents. They (corrupt politicians) need to feed us," cried one protester on Saturday.

"They vaccinated themselves from corona but they opened the country so that people could die," he added, referring to a group of lawmakers who inoculated themselves in parliament last month without prior approval, a move that led the World Bank to consider suspending its financing of vaccines in Lebanon.

Another protester who identified himself only by his first name, Ali, said he was frustrated that other Lebanese were still sitting at home.

In October, former Prime Minister Saad Hariri was named to form a new Cabinet but five months later, disagreements between him and President Michel Aoun on the shape of the Cabinet have stood in the way of a new government's formation.

Lebanon has also been in desperate need of foreign currency, but international donors have said they will only help the country financially if major reforms are implemented to fight widespread corruption, which has brought the nation to the brink of bankruptcy.

Lebanese lived above their means for years taking debt to buy imports they didnt need to impress people they dont like with money they dont have.

We have to live in frugality, within our means now.

What is happening today was a bomb waiting to happen since 20 years. Well now it happened.

Lets pick up the pieces and build anew.

Actually, the imports were needed... lebanon is 80% dependent on imports. but yes, we were living outside our means