Pope Says Next Trip Will be to 'Suffering' Lebanon 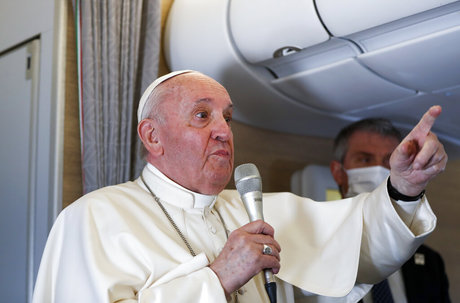 Pope Francis has promised that his next foreign trip will be to crisis-hit Lebanon, shortly after he wrapped up a historic visit to Iraq.

“Lebanon is a message… Lebanon is suffering,” the pontiff added in an in-flight press conference, vowing to visit the country as soon as possible.

“Lebanon has some weakness resulting from diversity… but it has the strength of the people… who are as strong as the cedars,” the pope went on to say.

He added that Maronite Patriarch Beshara al-Rahi had asked him to add a Beirut leg onto his Iraq trip but that he had declined, thinking it would be like tossing the country "crumbs," given all Lebanon's current problems.

"But I wrote him a letter and promised I'd go to Lebanon. Today Lebanon is in a crisis, an existential crisis, and my next trip will be to Lebanon," the pope went on to say.

I hope he’ll pull Rahi’s ear for misbehaving by backing the corrupt regime.