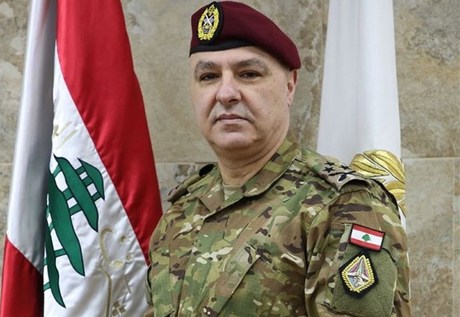 “The army is part of this people and it is suffering alike,” Aoun said in a meeting Yarze with the army’s top officers.

“The dire political situation has reflected itself on all levels, especially economically, which led to a rise in the levels of poverty and hunger. The money of depositors is trapped in banks and salaries have lost their purchasing power, and accordingly the salaries of soldiers have lost their value,” Aoun added.

Addressing political officials, he said: “Where are we headed? What do you intend to do? We have repeatedly warned over the seriousness of the situation and the possibility of its explosion.”

Commenting on the protests that have been engulfing the country for a week now, Aoun stressed that the army “supports the freedom of peaceful expression, which is enshrined in the constitution and international conventions, but without attacks on public and private property.”

He also vowed that “the army will not allow harm to stability or civil peace.”

The army chief also lamented that “the army’s budget is being lowered every year” and that “the funds are running out before the end of the year.”

"The army chief also lamented that “the army’s budget is being lowered every year” and that “the funds are running out before the end of the year.”

Oh ok... cut down on the number of soldier bodyguards and soldier drivers for your officers and their wives.

And their kids.... the drivers are used as personal shoppers by the wives... they’re even ‘loaned’ to close relatives, I know this firsthand :)

And their kids and unemployed daughters for ever and ever

Being in an army is like a perpetual treasury bond

why does he always look so constipated?

What a joke. What is this mans qualification? I bet it is. Being born simply Marinate question.

I have an idea! March with your troops on the houses of the politicians and burn them... Then assume power for 6 months until proper elections are held.

Is he wearing mascara?

Yes samiam, a chief of the army with guts would have launched a coup, and given back the power to the people...